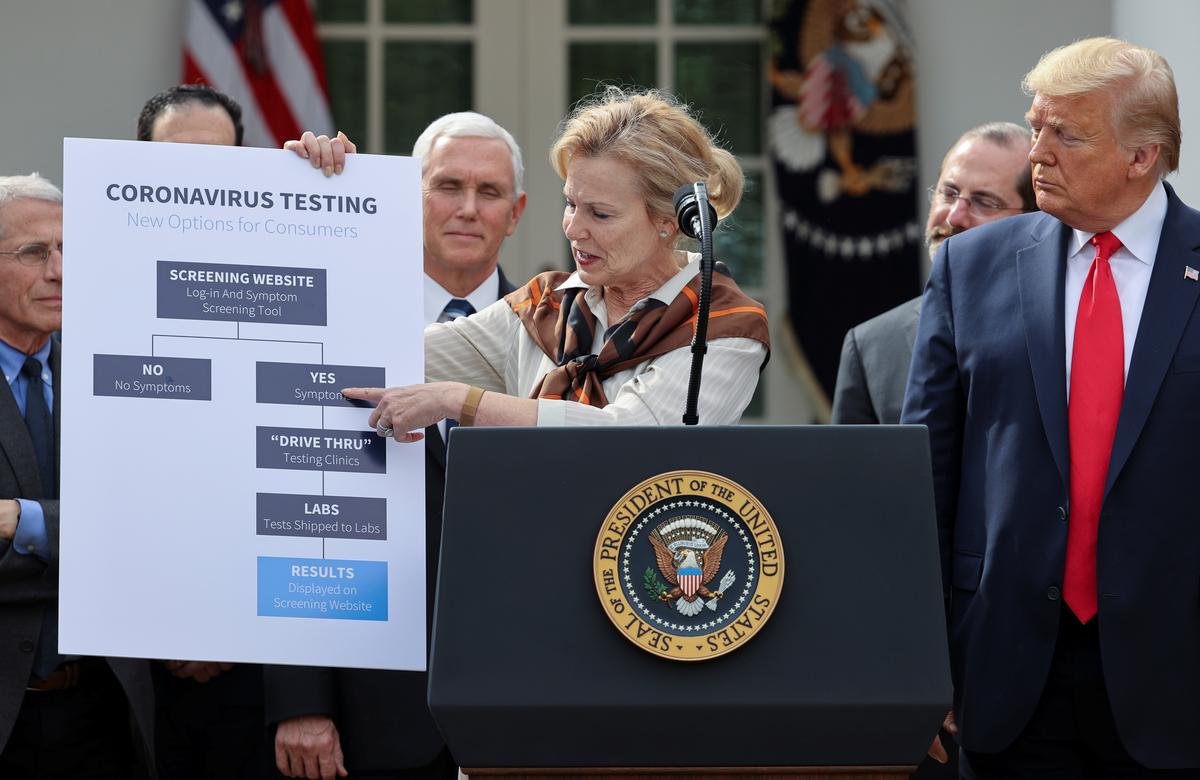 (Reuters) – Corporate America joined the fight against the spread of coronavirus on Friday, as President Donald Trump and executives announced that Google would offer a website to help people determine whether they needed tests and retailers would set up drive-through testing in parking lots.

Pressure has been rising on U.S. officials to increase and improve testing for the fast-spreading virus, which has reached almost every U.S. state and infected more than 1,660 people in the country.

“I want to thank Google. Google is helping to develop a website, it’s gonna be very quickly done, unlike websites of the past, to determine whether a test is warranted and to facilitate testing at a nearby convenient location,” Trump said.

“Google has 1,700 engineers working on this right now, made tremendous progress.”

An administration presentation showed a potential user would be asked several questions on the website and then given a recommendation as to whether they should get a coronavirus test.

Those requiring a test would be referred to a store that can provide assistance, potentially including a drive-through test, according to the administration’s presentation. Results would be available online in 24 to 36 hours.

Verily, a healthcare tech company also owned by Alphabet, said it was leading the effort to develop the web tool, with the help of an undisclosed number of Google employees.

“We are in the early stages of development, and planning to roll testing out in the (San Francisco) Bay Area, with the hope of expanding more broadly over time,” Verily spokeswoman Kathleen Parkes said.

About 1,700 Google workers have volunteered to help with coronavirus-related efforts, according to a person familiar with the matter, but it is unclear whether all of them are involved with developing the new website.

Carolyn Wang, another Verily spokeswoman, said it initially aimed to assess testing needs for people more prone to catching the virus, such as healthcare workers. But she said Verily now plans to trial the system more broadly at several sites around the San Francisco region.

Wang added that Verily was “collaborating closely with organizations like Quest Diagnostics and LabCorp who are also working on additional approaches to making testing more accessible and expedient in other areas.”

Quest Diagnostics Inc (DGX.N) and Laboratory Corp of America Holdings (LH.N) did not respond to after-hours requests for comment.

The Verily spokeswomen did not respond to questions on how data submitted by website visitors would be protected and used.

The tests will be conducted in retail store parking lots and sent to labs to complete testing in partnership with local health departments and diagnostic labs. The testing sites will not be run by the companies.

The cooperation with the Trump administration comes as Alphabet faces several antitrust investigations from state and federal agencies over its search and digital advertising businesses.

Trump has accused Google of skewing its search results to portray him negatively. The company has also attracted the administration’s ire for not renewing a contract to provide its artificial intelligence technologies for a military drone program.

“Google cozying up to the government doesn’t hurt,” said Andre Barlow, an antitrust expert with the law firm Doyle, Barlow and Mazard. “Obviously there are a lot of factors that are weighed in the antitrust investigation, which could go either way.”

Trump also is eager to increase testing after efforts were hampered by flawed kits distributed by the federal government in February, which gave some false results.