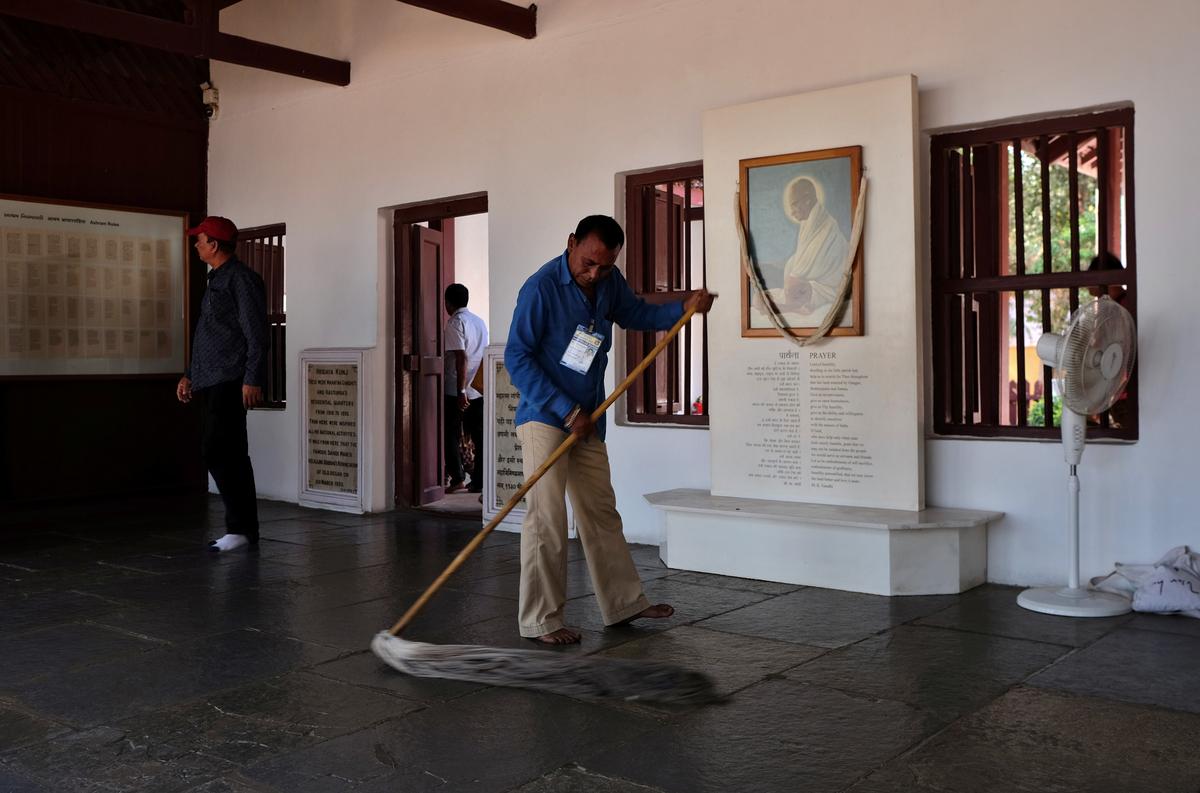 AHMEDABAD, India (Reuters) – India deployed more than 100,00 police and gave a facelift to the former home of independence hero Mahatma Gandhi on Sunday on the eve of a visit by U.S. President Donald Trump, whose two-day trip aims to repair bilateral relations after a trade spat.

A worker mops the floor inside Gandhi Ashram, where U.S. President Donald Trump is expected to visit, in Ahmedabad, India, February 22, 2020. REUTERS/Alasdair Pal

Trump lands in the western city of Ahmedabad on Monday, where he will address a rally of more than 100,000 in a newly-built cricket stadium, before a visit to Agra’s renowned Taj Mahal and a summit with Indian officials and business leaders in New Delhi.

In Ahmedabad, a wall at least six feet high in places will block a slum from Trump’s view.

India’s Prime Minister Narendra Modi has made grand visits to his home state of Gujarat a signature of his time in power, with the leaders of Japan and China both taking similar trips to Ahmedabad, the state’s largest city.

But the arrival of Trump, residents and officials say, is unprecedented in scale.

On Sunday, more than ten thousand police – some mounted on camels – fanned out across the city. At the Sabarmati Ashram, the former home of India’s independence hero Mahatma Gandhi, laborers watered lawns and painted walls.

“A general facelift is being done,” said Kartikeya Sarabhai, a trustee of the organization. “(But) the beauty of the Ashram is in its simplicity.”

The modest complex is a possible 15-minute stop on Monday for Trump, whose New York penthouse is decorated in gold in the style of French king Louis XIV.

Sarabhai said that should Trump visit, he is likely to be given a charkha, a traditional spinning wheel used by Gandhi, as well as a copy of his autobiography.

“We are also considering gifting a set of (Gandhi’s) Three Monkeys, which stress on not seeing, hearing, or speaking evil,” Sarabhai added.

Preparations have not been without problems.

A 30 foot arch by the VIP entrance to the stadium expected to be used by Trump collapsed on Sunday morning due to high winds, police said, though it was quickly repaired.

There is enthusiasm among many in India for Trump’s arrival, but others have been angered at the cost – nearly $12 million for a three-hour visit, according to officials.

At the Saraniya Vas slum, authorities have built a wall at least six feet high in places, shielding the settlement from Trump’s view.

Many residents – who receive water for 90 minutes per day at communal taps – earn around 7,500 Indian rupees ($104.36) per month sharpening knives for hotels, and are from the Saraniya community that gives the slum its name.

“Priority should be given to us – at least the basics should be provided,” said Sanjay Saraniya, a 27-year-old father of three, yards from the glossy tarmac of a newly-paved road and at least a dozen large billboards featuring Modi, Trump and his wife Melania.

“I wake up every morning and think about how I am going to earn enough money to feed my children.”

Half a dozen people said they had been offered 200 Indian rupees ($2.78) each by Modi’s ruling Bharatiya Janata Party to attend the roadshow – a claim that Dashrath Saraniya (no relation), a party worker in the slum, denied.

“He is our guest and we will welcome him – if we can see him,” Sanjay Saraniya said of the visit.