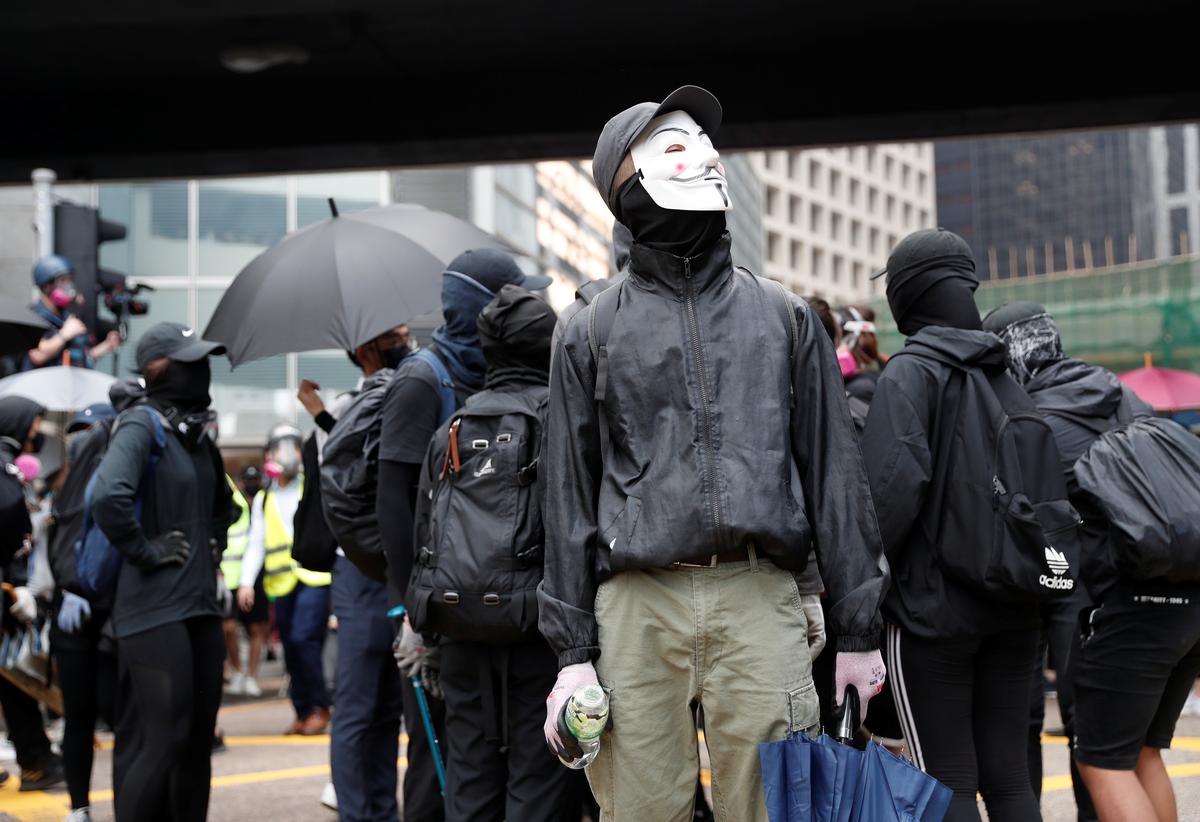 HONG KONG (Reuters) – A flash mob sprang up in the heart of Hong Kong’s financial center on Tuesday, hours after police fired tear gas at a university campus and territory-wide transport disruptions wreaked commuter havoc in the Chinese-ruled city.

More than 1,000 protesters, many wearing office clothes and face masks, rallied in the Central business district for a second day, blocking roads below some of the city’s tallest skyscrapers and most expensive real estate.

Some crouched behind umbrellas as riot police stood by.

Others chanted “Fight for freedom, stand with Hong Kong” and “Five demands, not one less”, referring to calls for universal suffrage and an independent probe into perceived police brutality, among other demands.

“Let’s stop focusing on the result. The result is all this chaos and madness but what is the root cause? We don’t have a fully democratic system,” said one demonstrator, a 25-year-old property manager wearing a white shirt, black suit pants and a black face mask who gave his name as Roy.

“We want to enjoy air-conditioning and a beer with friends. No Hong Konger wants this (violence), but the government is forcing us to take things to such a dramatic (level),” he said.

Police fired tear gas on Monday in Central, where some protesters also blocked narrow streets lined with banks, top-brand shopping malls and jewelry shops, most of which had pulled down their shutters.

There were chaotic scenes earlier on Tuesday as people thronged metro stations only to stream out shortly after, clogging footpaths as they queued for buses or alternative transport after some train services were suspended.

Some roads were closed in the morning with long traffic jams building during rush hour, a day after some of the worst violence to rock the former British colony. A protester was shot by police and a man set on fire on Monday.

Riot police were deployed at metro stations across the territory, while rail operator MTR Corp urged people to use other forms of transport.

“It is very inconvenient for me because I have a few meetings to go to in Central,” said a 38-year-old man who gave his name as Rodney and who works as a legal consultant for an international firm.

“Hopefully my partners will understand that my city is going through a tough period,” he said, adding that he blames Hong Kong leader Carrie Lam for the protests.

Passengers streamed out of at least one train that was forced to stop when barricades blocked the rail line.

Universities and schools canceled classes, with students, teachers and parents on edge a day after police fired tear gas and students hurled petrol bombs on some campuses.

Lam said protesters who tried to paralyze the city were being extremely selfish and hoped that universities and schools would urge students not to take part in the demonstrations.

More than 260 people were arrested on Monday, police said, bringing the total number to more than 3,000 since the protests escalated in June.

The metro station at Sai Wan Ho on eastern Hong Kong island, where a 21-year-old protester was shot at close range on Monday, was among those closed.

Lam said on Monday the violence had exceeded protesters’ demands for democracy and demonstrators were now the people’s enemy.

Protesters are angry about what they see as police brutality and meddling by Beijing in the freedoms guaranteed under the “one country, two systems” formula put in place when the territory returned to Chinese rule in 1997.

China denies interfering and has blamed Western countries, including Britain and the United States, for stirring up trouble.

The United States condemned the unjustified use of deadly force in the latest violence and urged police and citizens to de-escalate the crisis.

U.S. State Department spokeswoman Morgan Ortagus also urged Beijing to honor its commitments that Hong Kong would enjoy a high degree of autonomy and human rights, including freedom of expression and peaceful assembly.

Protesters clashed with police into the early hours of Tuesday after fierce skirmishes throughout Monday, when more than 100 people were injured.

Many workers were sent home early on Monday and shops and restaurants shut by the evening as the violence escalated, piling further pressure on an economy that entered a recession in the third quarter for the first time in a decade.

An editorial in the state-backed China Daily newspaper condemned the violence on Monday and took aim at the “leniency of Hong Kong judges”.

“Allowing (protesters) to apply for bail on easy terms and handing down extraordinarily light sentences has also served to encourage inhuman terrorist acts,” it said.

Prepare to study in Canada
Study permit: Who can apply
Pharmacy Assistants Can Now Immigrate To Canada Through Express Entry
Ontario Targets 53 Tech and Health Occupations In New PNP Draw
Manitoba PNP Draw: Province Invites 336 Canada Immigration Candidates
How You Could Immigrate To Canada Through The Start-Up Visa In 2023
Canadian Passport’s Power Gains One Point On Index