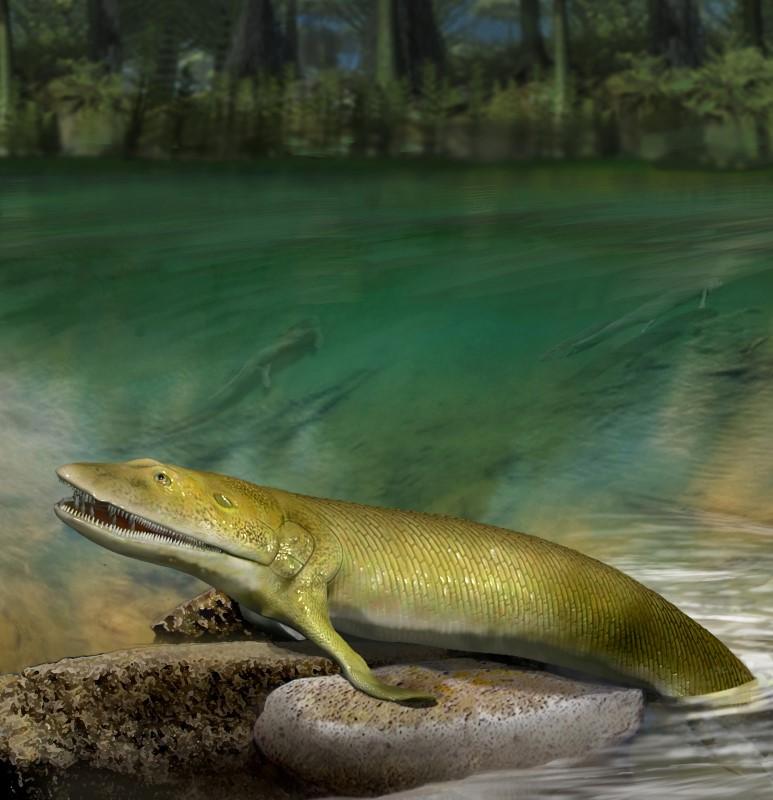 WASHINGTON (Reuters) – Inside the stout fins of a fish that prowled the shallow waters of an estuary in what is now eastern Canada about 380 million years ago, scientists have found what they call the evolutionary origins of the human hand.

FILE PHOTO: An artist’s reconstruction of the extinct fish Elpistostege watsoni, which lived about 380 million years ago in what is now Quebec, Canada, is seen in this illustration released to Reuters on March 18, 2020. Katrina Kenny/Handout via REUTERS

The researchers examined a remarkably complete fossil of a fish called Elpistostege watsoni that represents a pivotal stage in a landmark event in the history of life on Earth – the transition of fish to land vertebrates.

For this to occur, anatomical changes were needed including the evolution of hands and feet. Inside the tip of Elpistostege’s front fins – called pectoral fins – were tiny bones called radial bones arranged in a series of rows like digits – the precursor to fingers. These would have provided the flexibility for Elpistostege’s fin to bear weight on land.

“By looking at Elpistostege, it is important to realize that we, as human beings, are coming from a long line of evolution, that every part of our body, like our fingers, has a long evolutionary history,” said paleontologist Richard Cloutier of Université du Québec à Rimouski in Canada, lead author of the research published in the journal Nature.

“This is true for Homo sapiens but it is also true for all living organisms,” Cloutier added.

This marks the first time such traits have been found in a fish rather than in the earliest amphibians – the first land vertebrates – that later evolved from fish with sturdy fins like Elpistostege. It had two explicit digits and three other apparent digits.

More than five feet (1.6 meters) long, Elpistostege was primarily aquatic, with a crocodile-like body shape and flat triangular head, eyes atop the skull and numerous teeth around the jaws and in the palate. Its slender body was covered in thick scales and it had well-developed fins. It likely was the top predator in its brackish estuary ecosystem during the Devonian Period.

It is unclear whether it occasionally emerged onto land, but the structure of its fins would have enabled it to do so, said paleontologist and study co-author John Long of Flinders University in Australia. Its digits were still contained within the fin and not yet free moving like fingers.

Elpistostege was known only from partial fossils until this one was found in Miguasha National Park in Quebec province.

The four-limbed land animals that evolved from fish like Elpistostege are called tetrapods, a group now spanning amphibians, reptiles, birds and mammals including humans.

The digits of the 30,000-plus living species of tetrapods all share the same basic pattern found in Elpistostege. Like other similar fish, Elpistostege’s fin also has the precursors of tetrapod limb bones including the upper arm, forearm and wrist.