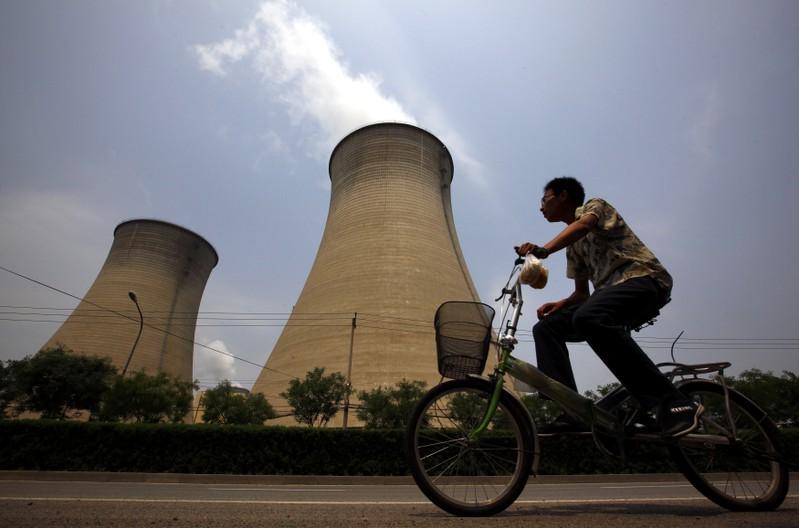 LONDON (Reuters) – Among the most hotly contested topics at international climate change talks in Madrid on December 2-13 will be the role of market-based mechanisms for reducing emissions of greenhouse gases, such as carbon offsets.

FILE PHOTO: A man rides his bicycle past the cooling tower and chimneys from a coal-burning power station in Beijing June 1, 2012. REUTERS/David Gray

WHAT IS OFFSETTING AND WHY IS IT A TRICKY TOPIC?

Carbon offsetting allows a country to help reach its own emissions reduction targets by funding emission reductions in another country. Companies are also increasingly using carbon credits to offset their emissions.

The first major offsetting scheme, the U.N.’s clean development mechanism (CDM), was set up under the 1997 Kyoto Protocol, in which 190 countries agreed country-by-country emission reduction targets.

The scheme was designed to help fund emission reduction projects in developing countries, while also providing offset credits to the developed world to help meet its Kyoto targets.

Negotiators in Madrid are set to discuss what kind of offsets, if any, should be used to meet the targets set out in the 2015 Paris agreement and how they should be monitored, following some cases where emissions cuts did not materialize.

The issue of which country claims the emission reduction will also need to be thrashed out, to avoid double counting.

WHAT KIND OF PROJECTS QUALIFY?

Carbon offset schemes cover all greenhouse gases but are measured in terms of carbon dioxide equivalent and can be awarded carbon credits.

More than 8,100 projects in 111 countries have registered with the CDM scheme, which has handed out over 2 billion carbon credits, called Certified Emission Reductions (CERs), representing 2 billion tonnes of carbon dioxide reduction.

Projects registered under the scheme range from capturing and using methane gasses in pig manure to create electricity to replacing traditional wood and coal burning cookstoves with cleaner alternatives such as ethanol. Offsets can be bought by individuals, companies or countries.

WHAT ABOUT CARBON SINKS?

To qualify, carbon credits from REDD+ projects must be approved by the U.N.s Framework Convention on Climate Change (UNFCCC).

Critics say offsetting emissions reduces incentives for the drastic emissions cuts needed to slow global warming and does not always bring the intended benefits; for instance, new trees may not grow as quickly as promised.