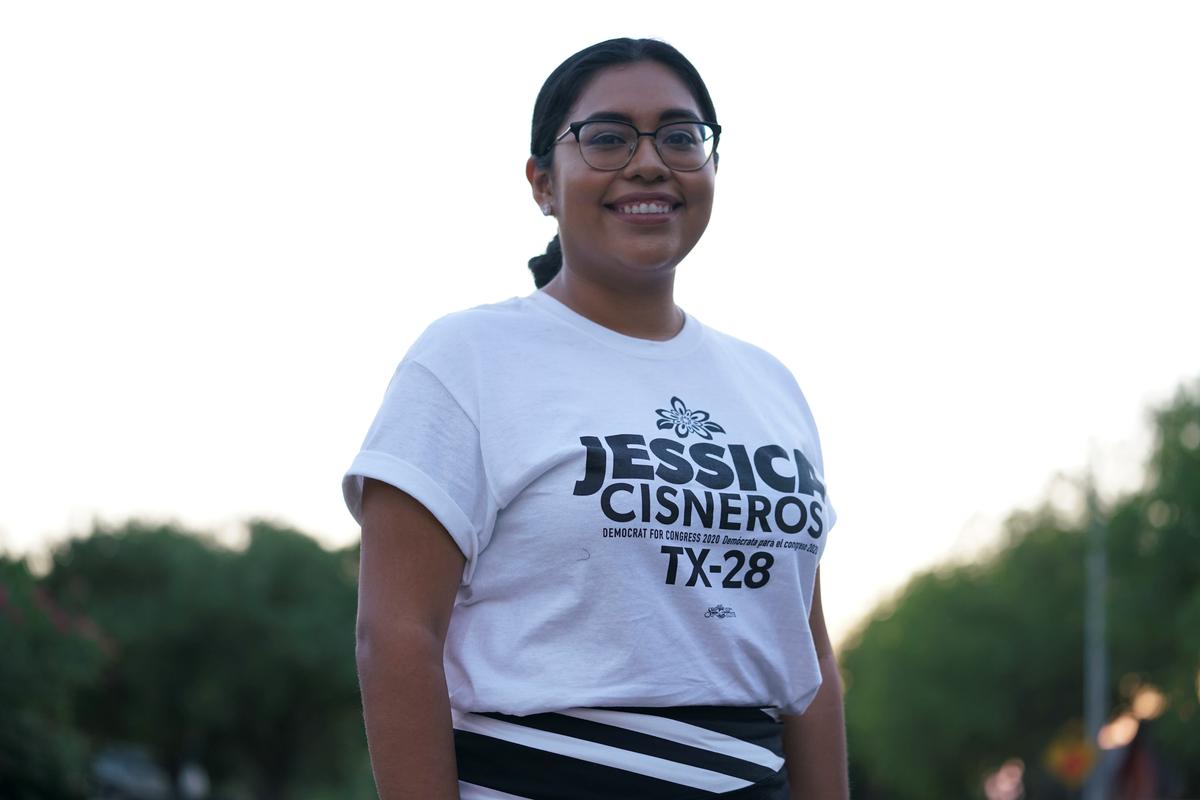 LAREDO, Texas (Reuters) – Jessica Cisneros interned for U.S. Representative Henry Cuellar in 2014, and the congressman later wrote letters to help her get into law school.

Democrat Jessica Cisneros, who campaigns for a House seat, poses for a photo in Laredo, Texas, U.S., October 8, 2019. REUTERS/Veronica Cardenas

Now the 26-year-old immigration lawyer is gunning for her former boss’ job, saying his values are out of touch with the sprawling south Texas district he has represented for 15 years.

Cisneros calls Cuellar, an abortion opponent who got an “A” rating from the National Rifle Association, “Trump’s favorite Democrat.”

She is one of a half-dozen progressive candidates around the country who are taking on moderate House Democratic incumbents and are backed by Justice Democrats, the same political action committee that last year helped launch Representative Alexandria Ocasio-Cortez’s political career.

Ocasio-Cortez, who beat a top Democrat in New York in the 2018 midterm elections, has since become the face of the “Squad,” freshman Democrats aiming to move the party farther left on issues such as healthcare and climate change.

Justice Democrats, set up by former activists from Senator Bernie Sanders’ 2016 presidential campaign, have vowed to expand the group’s ranks in next year’s election.

Cuellar, 64, was their first target. His March 3 primary with Cisneros in Texas’ 28th congressional district will be an early test of how far to the left Democratic voters have moved.

“The myth that south Texas is conservative is just that, a myth,” Cisneros said in an interview this month in Laredo.

The divide highlighted in the Texas race echoes a similar battle playing out in the Democratic presidential nominating contest, where moderates led by former Vice President Joe Biden tussle with progressives Elizabeth Warren and Bernie Sanders over the vision for the party.

Cisneros, who has won Warren’s endorsement, embraces left-wing causes such as “Medicare for All,” which would replace the current patchwork healthcare structure with a single-payer system, and the “Green New Deal” that would eliminate U.S. greenhouse gas emissions within a decade.

The daughter of Mexican-American immigrants, Cisneros said that residents in the largely Hispanic district, which is centered in Laredo and stretches from the San Antonio suburbs to the U.S.-Mexico border, are warming to liberal policies. Democrat Hillary Clinton won the district in the 2016 presidential race by 20 percentage points.

“I haven’t had a single person disagree with me on the policies, once you start explaining them,” Cisneros said, adding that “Medicare for All” resonates in a place where many people go into Mexico for cheaper medical care. The district’s poverty rate is nearly double the national average.

Cuellar, a member of the powerful House appropriations committee, blasted the group backing Cisneros as the “Justice Socialists.”

Their mission could backfire, not only in the Texas district but nationwide in 2020, said Cuellar, who has the backing of House Speaker Nancy Pelosi and Representative Cheri Bustos, the chairwoman of the House Democrats’ campaign arm.

Cuellar warns the stances taken by progressives could alienate independent voters. Republican President Donald Trump, who is up for re-election next year, has already sought to demonize the entire Democratic party as too extreme.

“If we lose the independents because we are far left, then that election in November 2020 is going to go in a direction that we don’t want,” Cuellar said in an interview at a Laredo coffee shop.

Cuellar questions whether taxpayers can afford a far-reaching healthcare program like “Medicare for All.” He doubts south Texas voters would favor the Green New Deal, saying thousands of jobs in the area depend on the oil and gas industry.

Earlier this year, Cuellar voted with Republicans and other moderate Democrats to pass a border aid package without the additional protections for migrant children that liberals had sought.

He defended his record, which according to the Almanac of American Politics ranks him among the most conservative House Democrats.

“When you have folks that want to purify the Democratic Party and say the only way you can be a Democrat is to be in our image, that is wrong,” Cuellar said.

As an entrenched incumbent, Cuellar has a financial edge over his challenger. He raised $375,582 to Cisneros’ $317,760 in the third quarter. He has $3.2 million in cash on hand, more than ten times the amount she has, according to the Center for Responsive Politics.

In addition, the Democratic Congressional Campaign Committee only supports House incumbents, not their challengers. Many voters interviewed in the 28th district said they were not familiar with Cisneros.

But the fact that the Texas congressional primary will be held on the same day as the state’s presidential primary could double turnout and boost Cisneros’ chances, said Mark P. Jones, a political science professor at Rice University in Houston.

“If she is able to make the case that she is the congressional equivalent of Elizabeth Warren and Bernie Sanders and Beto O’Rourke, and Henry Cuellar is not, then Cuellar could find himself in some trouble,” Jones said.

In the suburbs east of San Antonio, Bryan Gerard, a Democratic precinct chairman, said he would argue for the local party organization to endorse Cisneros over Cuellar.

“I consider him a DINO,” Gerard said, using the acronym for ‘Democrat in name only.’ Cisneros, on the other hand, impressed Gerard with her focus on improving the lives of people throughout the district.

“She struck me as a future Squad member, if she got elected.”