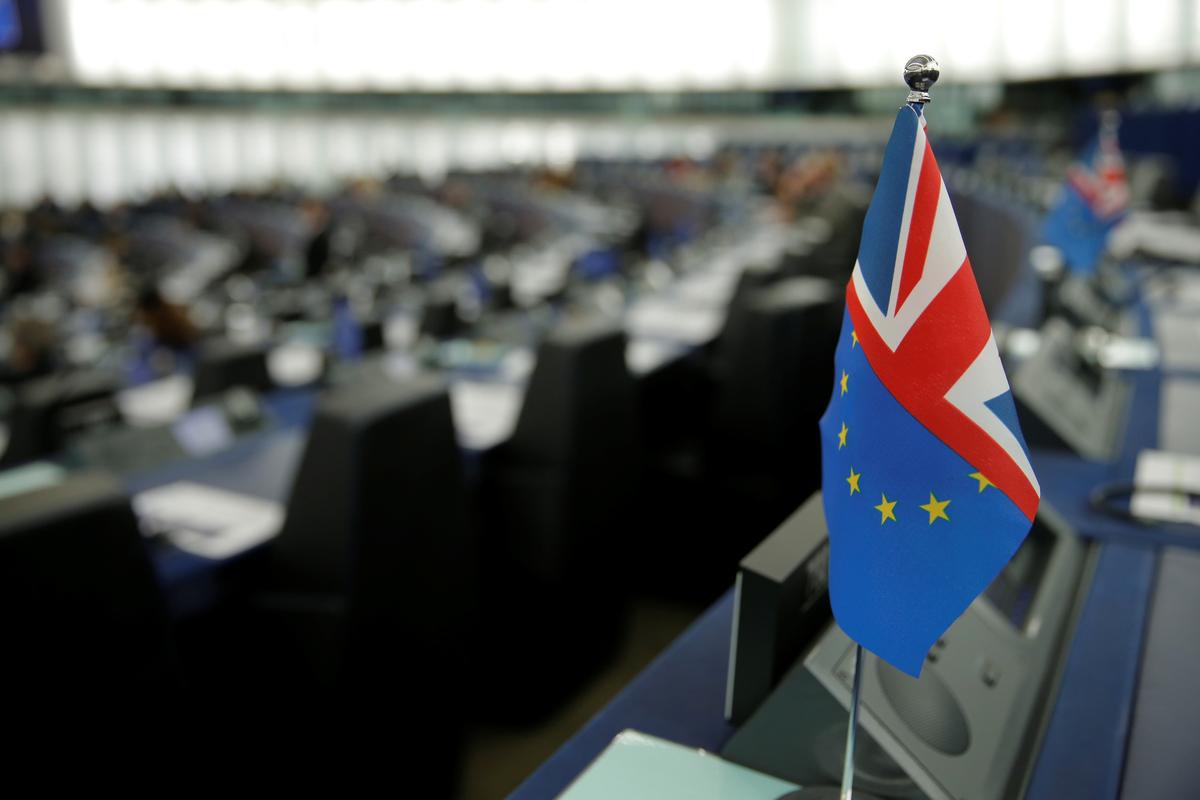 An hybrid flag depicting the EU and the British flags is seen during a debate on the last EU summit and Brexit at the European Parliament in Strasbourg, France, October 22, 2019. REUTERS/Vincent Kessler

“There was full agreement on the need for an extension,” an EU official said after ambassadors to the 27 other EU member states met to discuss postponing Britain’s exit from the bloc, less than a week before the current deadline of Oct. 31.

“Work will continue over the weekend,” he said, adding that the envoys would meet again in Brussels on Monday or Tuesday.

Johnson has admitted that he will not meet his “do or die” deadline of Oct. 31 and has demanded a vote in parliament on Monday on whether to have a snap election on Dec. 12.

The EU envoys, who met for about two hours, had been due to discuss the length of a third delay to Brexit but diplomats said they were reluctant to set a date because it could dictate the direction of political events in London.

One EU diplomat said France pressed the other 26 to wait.

“Everyone wanted a decision today. But France had a problem with that and wanted to wait until Monday/Tuesday to see what happens in London,” the diplomat said. “We will come back to this discussion on length after the weekend. And this time is to be used for political consultations.”

Another diplomat added: “All this discussion delayed because of France.”

According to a draft document seen by Reuters ahead of Friday’s meeting, a delay was to be granted “with the view to allowing for the finalisation of the ratification” of the divorce agreement the EU 27 sealed with Johnson last week.

The draft text left the new Brexit date blank, but said the split could take place earlier if ratification was completed earlier – an idea known as “flextension”, an amalgamation of the words “flexible” and “extension”.

An EU official explained: “It’s basically between a three-month flextension or a two-tier one.”

Under the first idea, Britain would leave on Jan. 31, three months after the current departure date, but earlier if it and the EU ratify an agreement before that. The second one would include a second specific date when Britain could leave.

More than three years after Britons voted 52%-48% to be the first sovereign country to leave the European project, the future of Brexit is unclear.

Johnson won the leadership of the ruling Conservative Party to become prime minister in a minority government by staking his career on getting Brexit done by Oct. 31, but after parliament rejected his proposed legislative timetable on Tuesday he will fail to do that.

Brexit was initially supposed to have taken place on March 29 but Johnson’s predecessor, Theresa May, was forced to delay twice as parliament defeated her Brexit deal by margins of between 58 and 230 votes earlier this year. Her failure cost May her job.

Johnson said in a letter to opposition Labour leader Jeremy Corbyn on Thursday he would give parliament more time to approve his Brexit deal by Nov. 6 but lawmakers must on Monday back a December election, Johnson’s third attempt to try to force a snap vote.

“Prolonging this paralysis into 2020 would have dangerous consequences,” he said. “If I win a majority in this election, we will then ratify the great new deal that I have negotiated, get Brexit done in January and the country will move on.”

Corbyn said he would wait to see what the EU decides on a Brexit delay before deciding which way to vote on Monday, repeating that he could only back an election when the risk of Johnson taking Britain out of the EU without a deal to smooth the transition was off the table.

It is not clear how Corbyn will respond now that the EU has shelved its decision on a Brexit date.

A spokesman for Johnson said the prime minister would push ahead with plans to leave the EU if lawmakers fail to back his call for a pre-Christmas election.

“It’s looking like Boris Johnson will have to write a new letter to Santa Claus for his Christmas wishes this year,” she said.