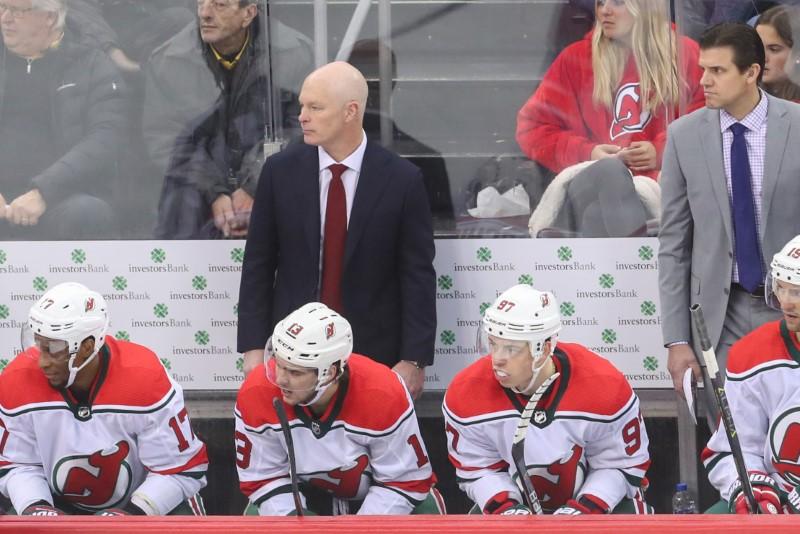 The Devils (9-13-4, 22 points) entered the night last in the Metropolitan Division with the second-worst record in the Eastern Conference. They lost their past two games — against the New York Rangers and at the Buffalo Sabres — by a combined score of 11-1.

The team announced that assistant coach Alain Nasreddine will be the interim head coach and that New Jersey pro scout Peter Horachek will join the staff as an assistant.

“John played an integral role in the development of this team in establishing a foundation for our future and we are grateful for his commitment, passion and unmatched work ethic,” Devils general manager Ray Shero said in a statement.

“John is a respected leader, developer of talent and friend which makes this decision difficult. We are a team that values and takes pride in accountability to the results we produce. We are collectively disappointed in our performance on the ice and believe changes were needed, starting with our head coach.”

Hynes, 44, was in his fifth year as the head coach of the Devils, posting a career record of 150-159-45. New Jersey missed the playoffs in three of his four seasons, but the team had higher expectations for 2019-20 after trading for three-time All-Star defenseman P.K. Subban, signing free agent wing Wayne Simmonds and selecting center Jack Hughes with the first pick in the draft.

This will be the first head coaching experience for Nasreddine, who appeared in 74 NHL games across five seasons from 1998 to 2008. He has been an assistant coach in New Jersey since July 2015.

Prepare to study in Canada
Study permit: Who can apply
US Plans to Lift Covid Emergency Declarations May 2023
How You Could Immigrate To Canada Through The Start-Up Visa In 2023
Ontario Invites 10 Canada Immigration Candidates In New Entrepreneur Draw
Alberta Invites 200 Candidates, Minimum CRS Of 324 In New Express Entry Draw
Canada Invites 893 Candidates In First PNP-Only Express Entry Draw Of 2023