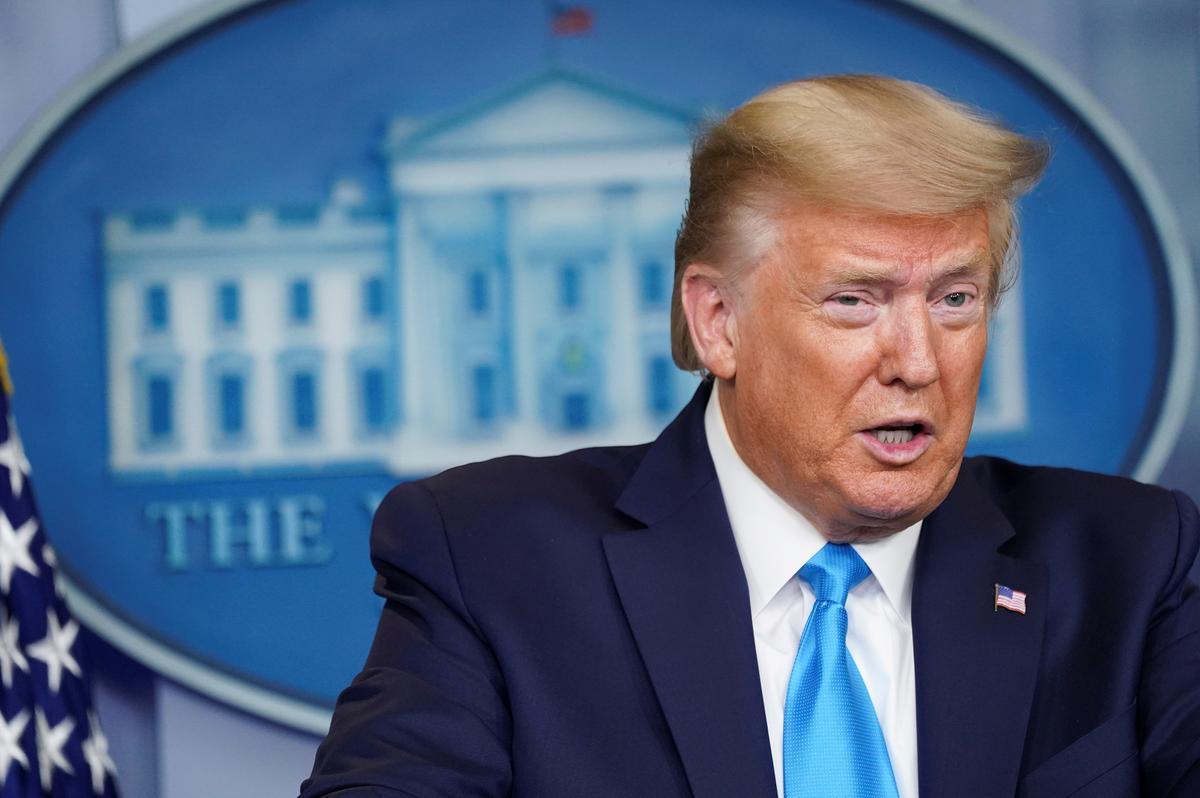 (Reuters) – For weeks, President Donald Trump has dominated television coverage with daily White House briefings on the coronavirus pandemic, declaring himself a “wartime president” and touting his administration’s response.

But Trump’s tendency to pepper his news conferences with misstatements, untruths and scientifically questionable advice has armed Democrats with a wealth of ready-made sound-bites to use against him ahead of the Nov. 3 election.

The challenge for Democrats – and their presumptive presidential nominee, Joe Biden – is how to highlight what they see as Trump’s failures in handling the crisis without appearing too crassly political when Americans are dying and losing their livelihoods as a result of the disease.

“If you’re on the attack, you risk being seen as tone-deaf,” said Tom McMahon, a former executive director of the Democratic National Committee. “People don’t want to be seen as playing partisan politics with a pandemic.”

The coronavirus outbreak has upended life across the country, shuttering large portions of the economy. Some 94% of Americans are under stay-at-home orders to slow the spread of the respiratory virus, which had infected about 430,000 people in the United States and killed more than 14,700 as of Wednesday night.

In advertisements in battleground states that will decide the election, the Biden campaign and Democratic-aligned groups are testing ways of counter-programming Trump’s messaging, while trying to avoid alienating swing voters whose allegiance remains up for grabs.

Priorities USA, a Democratic super PAC that has spent $7 million on pandemic-themed digital and TV commercials in five swing states, is using online panels with voters in key states to test for any backlash, said spokesman Josh Schwerin.

The group has grappled with how to spotlight Trump’s words without sharing misinformation. Like other Democratic-aligned organizations, Schwerin said it was refusing to use clips of Trump promoting unproven treatments or saying he would wear a mask if he thought it was important.

“We would never put that on TV,” Schwerin said.

The Democratic National Committee has been sending out tweets and releases to combat Trump’s daily briefings. The organization also has a research team of about 30 people compiling clips of Trump and other administration officials to repackage later in the year.

Aware of the potential sensitivity in messaging, a DNC spokesman said the organization would avoid citing the number of deaths in criticizing Trump.

Biden, too, has been careful in his language. After Democratic House of Representatives Speaker Nancy Pelosi called Trump’s coronavirus response “deadly,” Biden demurred when asked on CNN a week ago whether the Republican president should be blamed for American deaths.

“President Trump is not responsible for the coronavirus, but he is responsible for using all the power at his disposal to be able to deal with this virus,” the former vice president said.

The campaign’s advertising reflects the same balancing act. In one video airing on Facebook and Instagram in battleground states, Biden does not mention Trump by name. Instead, he notes that doctors and nurses lack medical supplies and promises never to leave them unprotected as president.

“There is a balance to strike, but I think we have been doing it effectively,” said T.J. Ducklo, a spokesman for Biden’s campaign.

Biden has maintained a 6-point lead over Trump among registered voters in recent weeks, according to Reuters/Ipsos polling. But he has struggled to break into television news coverage, reduced to conducting interviews from his basement recreation room since the pandemic halted all in-person campaigning.

Unlike some Democratic governors, such as California’s Gavin Newsom and New York’s Andrew Cuomo, who have seen their approval ratings soar as they confront their states’ outbreaks, the out-of-office Biden can only outline what he would do if he were in a position of power.

For some Democrats, Trump’s constant TV appearances have conjured up memories of 2016, when his unorthodox campaign enjoyed ubiquitous coverage.

Trump’s current campaign has also put its formidable digital advertising machine to work, with traditional events such as rallies on hold.

“The president obviously has a huge advantage,” said Tara McGowan, the founder of the progressive digital group Acronym. “He has a massive campaign war chest, and he has a captive national audience with his bully pulpit.”

“This crisis is hitting Americans – not Democrats or Republicans,” she said. “To try and politicize this crisis in terms of the election is ludicrous.”

A recent Priorities USA ad that aired the president’s comments downplaying the outbreak over a chart of rising U.S. cases drew the ire of the Trump campaign, which sent “cease-and-

desist” demands to television stations arguing the commercial falsely suggested he called the outbreak a “hoax.”

Trump has said he was referring to Democratic attempts to politicize the disease when he used the word “hoax.”

The percentage of Americans who approved of Trump’s handling of the coronavirus rose to 49% by the end of March from 40% at the beginning of that month, but has since fallen back to 42%, according to Reuters/Ipsos polling.

Trump’s efforts to control the narrative surrounding the coronavirus will be more difficult than for previous crises that subsumed his administration, such as the Russia investigation or impeachment, said Tyler Law, a veteran Democratic strategist.

“This is a combination of a public health crisis and an economic crisis,” he said. “These are the two things that help drive voter behavior the most.”