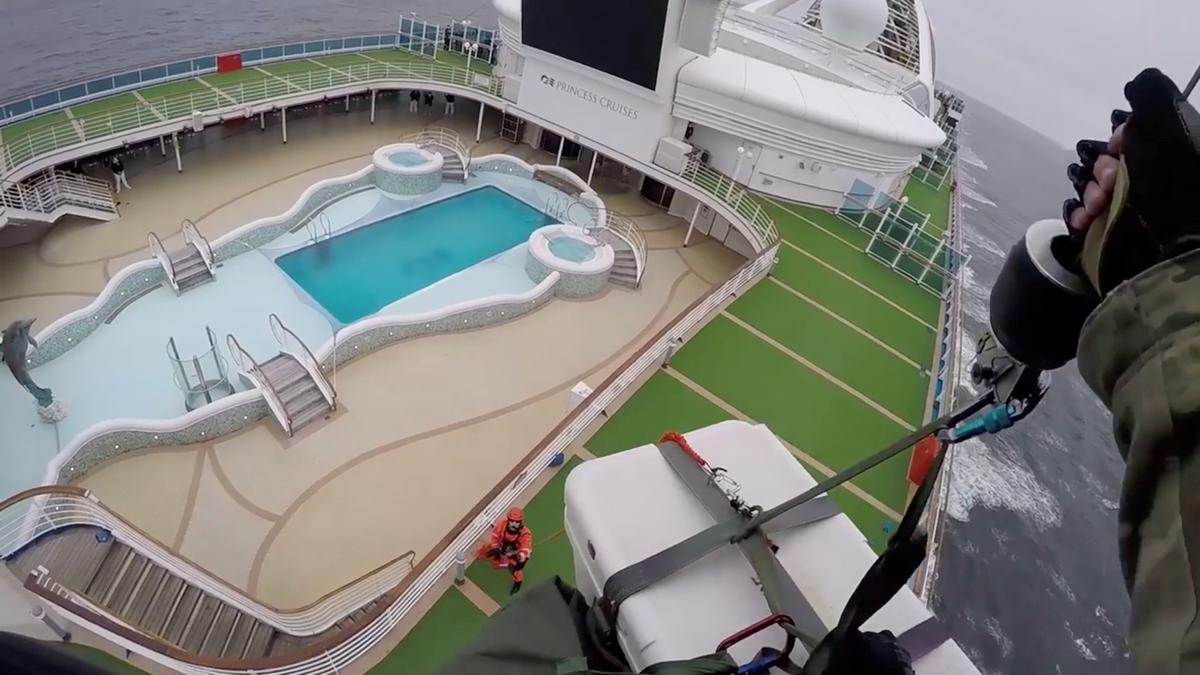 (Reuters) – First, the food buffet was shut down as gloved staff scurried about wiping every surface in sight. Then the ocean liner’s gym, bar, casino and boutiques were closed, with passengers urged to keep to themselves. Finally, they were confined to their staterooms.

Once the captain announced their vessel may be tainted with coronavirus, Grand Princess cruise ship guests like Kathleen Reid were left with little to do but contemplate the prospect of extended isolation at sea, or worse.

“My first reaction was, ‘Oh, crap. We’re going to be quarantined, and maybe get sick,’” Reid, 67, a retiree from Granbury, Texas said. “We don’t know what’s happening, so we’re just kind of in limbo, waiting.”

Reid, who spoke to Reuters by cell phone on Thursday, was one of some 2,300 passengers stuck with about 1,100 crew members aboard the Grand Princess, idled off the coast of California a day after the ship was denied entry to its home port in San Francisco.

California Governor Gavin Newsom insisted that the ship remain at sea until passengers and crew complaining of flu-like symptoms during a 15-day roundtrip cruise to Hawaii could be tested for possible coronavirus infection.

On Thursday, the U.S. Coast Guard airlifted a batch of diagnostic kits to the ship via helicopter, and public health officials said samples collected would be flown back to a San Francisco Bay Area state laboratory for testing.

FEWER THAN 100 TO BE TESTED

Results were expected in about 24 hours, said Mary Ellen Carroll, executive director of the city’s Department of Emergency Management.

State and local officials acted after learning that 35 people aboard the ship had fallen ill, and that two passengers who had traveled on the same vessel for a voyage last month between San Francisco and Mexico later tested positive for coronavirus.

One, an elderly man from Placer County near Sacramento with underlying health conditions, died this week, marking the first documented coronavirus fatality in California. The other, from the Bay area, was described by Newsom as gravely sick.

Health officials say both individuals likely contracted the virus while they were aboard the ocean liner, a corporate cousin of the Diamond Princess cruise ship that was quarantined off Japan in February and was for a time the largest concentration of coronavirus cases outside China.

About 700 people aboard the Diamond Princess were ultimately infected with the virus and six have died in a crisis that experts have said was mismanaged by bureaucrats who failed to follow proper protocols.

Airmen from the Moffett Federal Airfield based, 129th Rescue Wing deliver coronavirus test-kits to the Grand Princess cruise ship off the coast of California, U.S. in this still image from a handout video obtained by Reuters on March 5, 2020. California National Guard/Handout via REUTERS

The Princess cruise line, a unit of Carnival Corp, the world’s largest cruise operator, said fewer than 100 passengers and crew from the Hawaii voyage of its Grand Princess have been identified for testing, including those who were ill.

Tests will also be given to dozens of holdover passengers from the Mexico trip who stayed on the ship for the voyage to Hawaii, as well as “guests currently under care for respiratory illness,” the cruise line said in a statement. They will remain quarantined on the ship until cleared by medical staff.

Specialists from the U.S. Centers for Disease Control and Prevention (CDC) were working with local health authorities and the Coast Guard to coordinate the operation.

They also were seeking to contact some 2,500 passengers who disembarked in San Francisco on Feb. 21 after the earlier cruise to Mexico. One of them, a Canadian woman from the province of Alberta, tested positive for the virus this week, health officials there said.

Princess Cruises has canceled the next scheduled departure of its Grand Princess Hawaii voyage from San Francisco, which had been set for March 7.

Passengers on the current cruise, meanwhile, were forced to make do with a rapidly shrinking choice of amusements.

Having already lost access to many of the ship’s favorite attractions – the bar, casino, shops, food buffet and gym – guests were also urged to practice “social distancing,” making an effort to keep at least 6 feet away from strangers on the ship, the company said. By midday on Thursday, they were asked to confine themselves to their staterooms until further notice.

It was unclear what would occur should anyone now aboard the ship test positive for the respiratory virus, which has infected more than 95,000 people worldwide, most of them in China, where the outbreak originated.

“Once we have results from the tests, the CDC and the state will determine the most appropriate location for the ship to berth, and the location needs to provide for the safety of the surrounding community as well as the passengers and crew,” Carroll told reporters on Thursday.

She said the ship might be directed to an arrival point other than San Francisco.

Reid, who is traveling with her husband, said the ship’s captain was keeping passengers informed of developments throughout the day with announcements every couple of hours, and that fellow guests seemed to be taking the uncertainty mostly in stride.

“People are, I’m sure, a little anxious, but nobody has just gone screaming mad yet,” Reid said, adding she had seen no obvious signs of anyone being sick.

“Hand-washing is a big deal,” she said, but “nobody is walking around sneezing or coughing.”