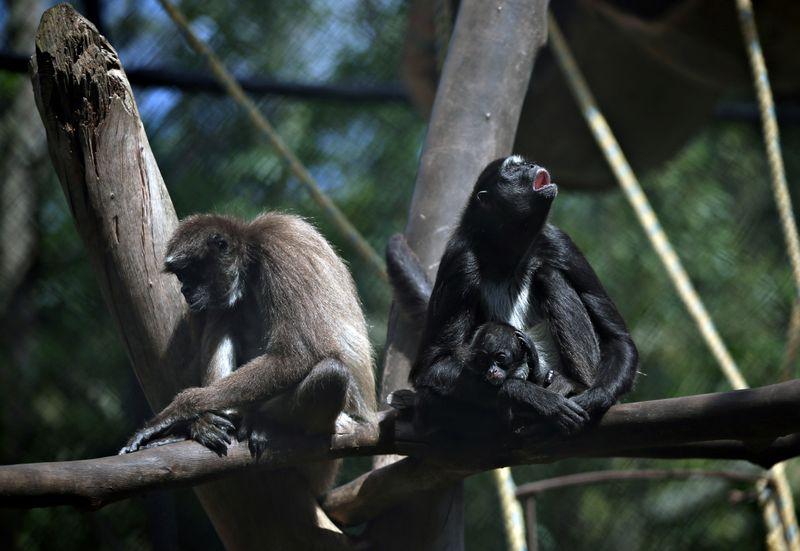 SAN ANTONIO DEL TEQUENDAMA, Colombia (Reuters) – A small zoo in central Colombia has called on its social media followers to come up with names for newborn primates delivered in the current birthing season – and most suggestions are related to the coronavirus pandemic.

A spider monkey hugs its baby inside a cage at the Santa Cruz Zoo, amid the outbreak of coronavirus disease (COVID-19) in San Antonio del Tequendama, Colombia April 8, 2020. REUTERS/Luisa Gonzalez

Covid and Cuarentena – the latter means quarantine in Spanish – are among the most popular suggestions for the cotton-top tamarind twins, tiny primates native to Colombia’s Caribbean coast. The pair were born a week ago in Santacruz zoo, which is in San Antonio Del Tequendama.

The potential names are also being considered for a white-tailed deer born just over a fortnight ago.

“We asked our followers on social media to suggest names for them,” Camilo Mendoza, the zoo’s animal health coordinator, told Reuters.

Mendoza explained that most births take place during the first three months of the year, when the weather is warmer, and before the start of the rainy season.

The zoo also takes in animals from circuses or that are seized by authorities fighting the selling or illegal trafficking of wildlife.

Incoming arrivals will come from two female chiguiros, the largest rodents in the world, as well as another deer, and a peacock, as well as several spider monkeys.

The keepers view the births as positive news in the middle of the coronavirus outbreak.

“It’s a message of hope for us to change how we are wired, our thinking, and that we recognize the importance of nature and animals, that we respect them,” Mendoza said.

The zoo is running out of resources because its main source of income, charging visitors the equivalent of about $5 per person, dried up with the start of a government-ordered quarantine, which will run until April 27.

“The reserves we have are exhausted,” said the zoo’s dietician, Daniel Bernal.