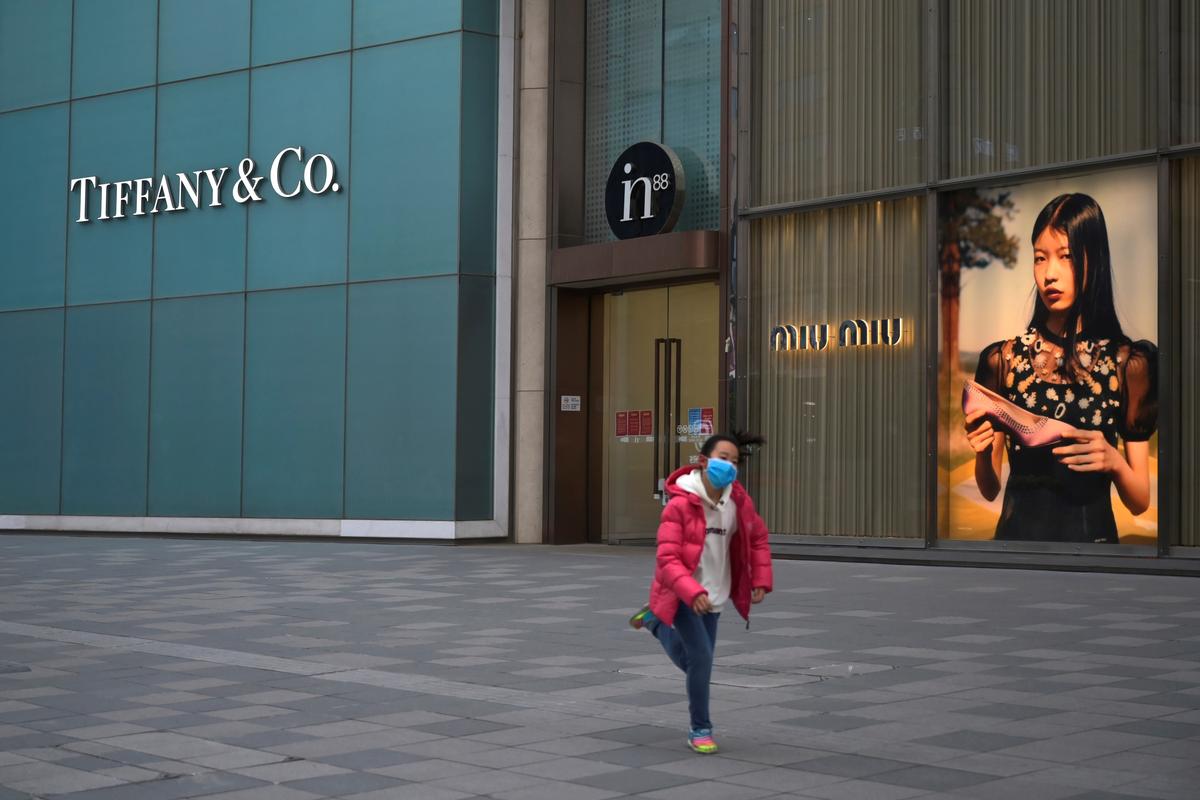 BEIJING (Reuters) – China reported an uptick in new cases of coronavirus on Friday, boosted by more than 200 people testing positive for the disease in two prisons outside of Hubei province, the epicenter of the outbreak.

A child wearing a face mask runs past stores of Tiffany & Co and Miu Miu, as the country is hit by an outbreak of the novel coronavirus, in Beijing, China February 20, 2020. REUTERS/Tingshu Wang

The epidemic is set to be a major focus of discussion at a meeting on the weekend of finance leaders from the Group of 20 major economies, Bank of Japan Governor Haruhiko Kuroda said, amid rising risks to global growth.

Japan and Singapore are on the brink of recession and South Korea on Friday said its exports to China slumped in the first 20 days of February as the outbreak upends global supply chains.

Mainland China had 889 new confirmed cases of coronavirus infections as of Feb. 20, the National Health Commission said, up from 394 cases a day earlier. The death toll rose by 118 to 2,236, mostly in the Hubei provincial capital of Wuhan, which remains under virtual lockdown.

Infections found in two jails, in the northern province of Shandong and the eastern province of Zhejiang, made up most of the 258 newly confirmed cases outside Hubei.

Top officials deemed responsible for the outbreaks have been fired, authorities said on Friday.

There have been 11 deaths outside of mainland China, according to a Reuters tally based on official statements.

South Korea’s fourth-largest city is the latest hotspot, with streets abandoned and residents holed up indoors after dozens of people caught the new coronavirus in what authorities described as a “super-spreading event” at a church.

The deserted shopping malls and cinemas of Daegu, a city of 2.5 million people, became one of the most striking images outside China of an outbreak that international authorities are trying stop from becoming a global pandemic.

The Tokyo Metropolitan government said it would cancel or postpone major indoor events for the next three weeks, Jiji newswire reported, as the Japanese capital prepares to host the 2020 Olympic Games starting in July.

In Hong Kong, which has confirmed 69 cases and two deaths from the disease, dozens of police officers were quarantined after an officer tested positive following a banquet with 59 other police on Tuesday.

Iranian health officials urged all religious gatherings to be suspended in Qom, news agency ISNA said on Thursday, after two more people tested positive for the coronavirus in the holy city, where two died of it this week.

Two Australians evacuated from a quarantined cruise ship in Japan had tested positive for the pathogen at a quarantine camp in the country’s far north and would be hospitalized near their homes, Australia’s health department said on Friday. [L4N2AK62F]

Japan began allowing passengers who test negative to leave and hundreds disembarked this week, with hundreds more set to disembark on Friday.

As G20 finance ministers prepare to meet over the weekend in Saudi Arabia, the IMF said it was too early to tell what impact the virus would have on global growth.

“We are still hoping that the impact will be a V shaped curve” with a sharp decline in China and sharp rebound after the containment of the virus, IMF Managing Director Kristalina Georgieva said.

“But we are not excluding that it might turn to be a different scenario like a U curve where the impact is somewhat longer.”

The earliest vaccine for the coronavirus would be submitted for clinical trials around late April, China’s Vice Science and Technology Minister Xu Nanping said.

Asian shares dipped on Friday as fears over the creeping spread of the disease sent funds fleeing to the sheltered shores of U.S. assets, lifting the dollar to three-year highs. [MKTS/GLOB]

Fears of the contagion triggered violence in Ukraine, where residents of a central town clashed with police, burned tires and hurled projectiles at a convoy of buses carrying evacuees from Hubei to a quarantine center.

Hundreds of helmeted police, police vans and an armored personnel carrier were dispatched to keep order as the town waited for the evacuees to arrive.

Americans evacuated from China due to the coronavirus outbreak also faced discrimination.

Amy Deng, who underwent home quarantine with her daughter Daisy, 8, said neighbors had called police over concerns they would spread the disease.

“People were already panicked, then they made up this rumor and spread it, telling us not to even live in the community,” said Deng, 45, a Santa Rosa, California, acupuncturist.

China’s Global Times newspaper reported growing fears of a “potential explosion of infection numbers in the capital”, after 36 new cases were found at a Beijing hospital.

Japan reported the deaths of two elderly passengers from the Diamond Princess cruise ship on Thursday, the first fatalities from aboard the ship where more than 630 cases account for the biggest cluster of infection outside China.

Amid criticism of the government’s handling of the situation, Japanese Chief Cabinet Secretary Yoshihide Suga said one of deceased former passengers had developed a fever on Feb. 5 but was not removed from the ship until the 12th.

Prepare to study in Canada
Study permit: Who can apply
Canada Conducts First Express Entry Draw Since NOC 2021 Implemented
Here Are The Top 10 Most In-Demand Jobs In The Canadian Province Of Nova Scotia
British Columbia Expands BC PNP Tech Immigration Stream With Launch Of NOC 2021
Immigration Spikes In September With Canada On Course For Record Annual Numbers
Canada Targets US H1-B Technology Professionals