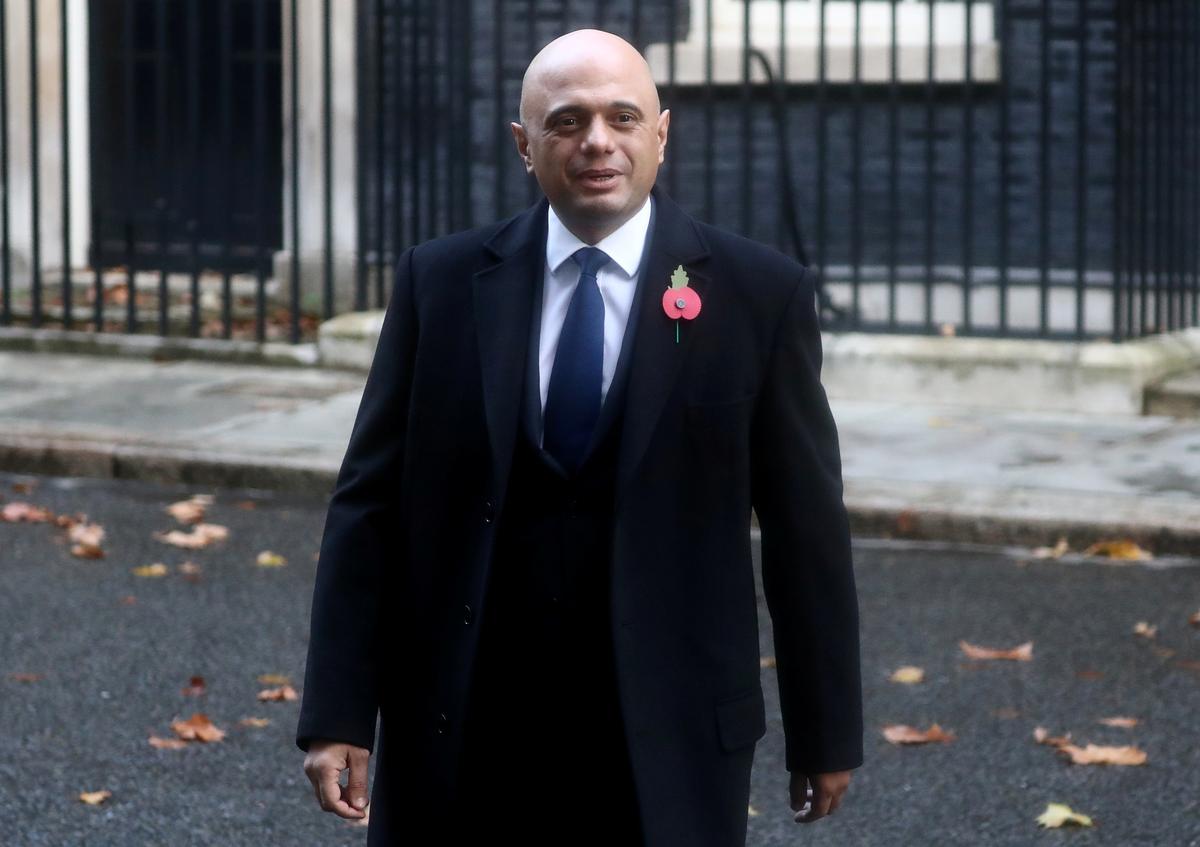 Britain’s Chancellor of the Exchequer Sajid Javid departs Downing Street to attend the National Service of Remembrance, on Remembrance Sunday, at The Cenotaph in Westminster, London, Britain, November 10, 2019. REUTERS/Simon Dawson

Labour strongly dismissed the report, which said it would increase spending by 1.2 trillion pounds ($1.5 trillion) over the next five years, calling it fake news.

The future path of Britain’s economy, the world’s fifth largest, has been at the centre of the election campaign in recent days, with both parties pledging higher spending, but arguing over the scale of investment needed and how to pay for it.

“These are eye-watering levels of spending – 1.2 trillion (pounds) – it will be absolutely reckless and will leave this country with an economic crisis within months,” Javid told the BBC on Sunday.

The Conservatives, led by Prime Minister Boris Johnson and currently ahead in opinion polls, said the figure was based on Labour’s manifesto for the 2017 election and estimates of more recent policy pledges.

But Javid refused to put a price tag on his own party’s plan for government, saying it would fully account for new spending when the party manifesto is published. Labour has also pledged to explain how it would pay for its programme for government.

“This ludicrous piece of Tory fake news is an incompetent mish-mash of debunked estimates and bad maths cooked up because they know Labour’s plans for real change are popular,” said Labour’s would-be finance minister, John McDonnell.

Costs for other policies were based on an immediate start, whereas Labour has said they would be phased in over several years.

Johnson, whose minority government has had to rely on support from political allies, called the early election in an attempt to break a parliamentary impasse over Brexit.

Labour, run by socialist Jeremy Corbyn, makes no secret of its desire to increase the role of the state.

“Labour will tax the rich to pay for things everyone needs and deserves, like decent housing, healthcare and support for our children,” McDonnell said.

In a separate interview for the Sunday’s Independent he said the party’s manifesto would be “the most radical ever” and include a pilot programme for a universal basic income.

The Conservatives currently enjoy a sizeable lead in opinion polls over Labour at the start of election campaigning.

Both Javid and McDonnell unveiled significant spending plans last week, reflecting a desire to win over voters after nine years of cutbacks under Conservative-led governments.

Like in many advanced economies, British government borrowing costs are currently close to record lows.

But on Friday credit ratings agency Moody’s assigned a negative outlook to Britain’s sovereign rating, blaming Brexit-related policy uncertainty and a lack of political will to reduce debt.

“The number one thing they point to is this paralysis in decision making, and that is coming from what was a very dysfunctional parliament,” Javid said when asked about the Moody’s report.

He said the only way to remove the uncertainty was to elect a Conservative government.

Britain’s public debt currently stands at around 1.8 trillion pounds, more than 80% of economic output – though below equivalent amounts in the United States, Japan and France.