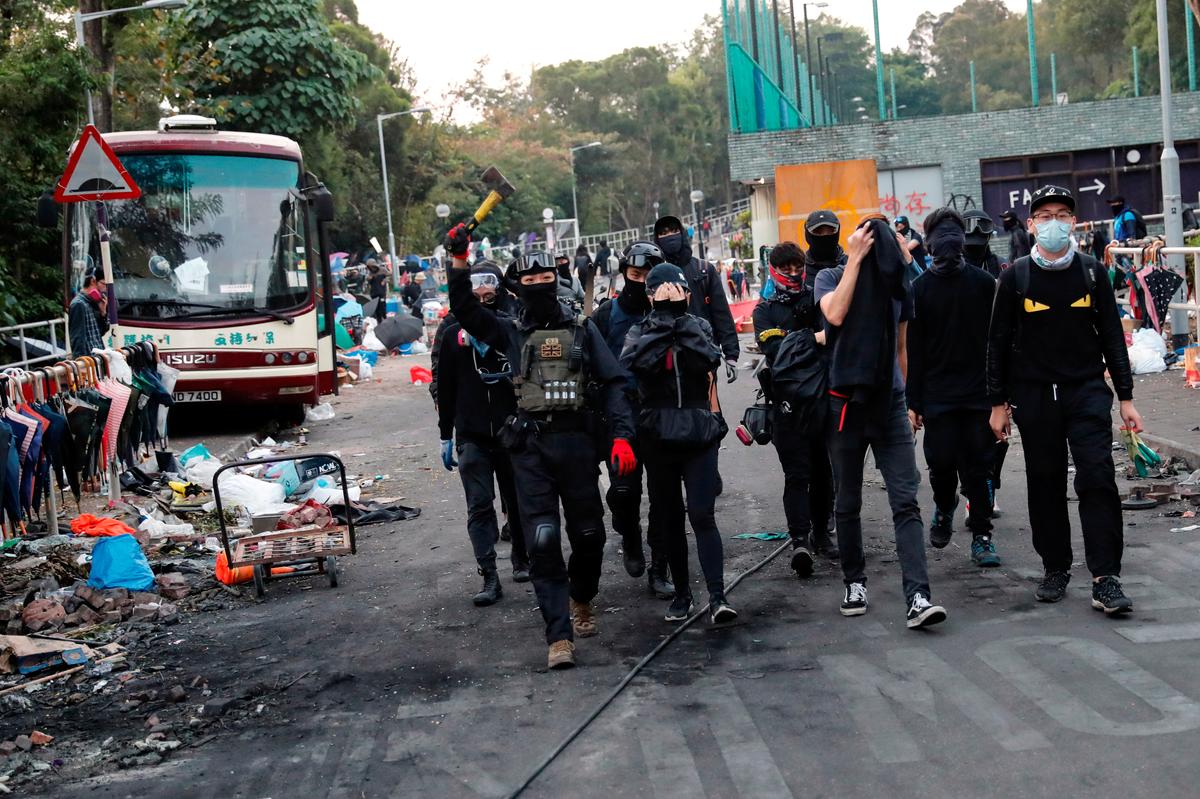 HONG KONG (Reuters) – Anti-government protesters paralyzed parts of Hong Kong for a fourth straight day on Thursday, forcing school closures and blocking highways and other transport links to disrupt the financial hub amid a marked escalation of violence.

Anti-government protesters scout at a makeshift gate during a standoff with riot police at the Chinese University of Hong Kong, Hong Kong, China November 14, 2019. REUTERS/Tyrone Siu

Protesters have torched vehicles and buildings, hurled petrol bombs at police stations and trains and vandalized prime shopping malls over the past week in some of the worst violence seen in more than five months of unrest.

Black-clad protesters and university students maintained their blockades of major roads, including the entrance to the Cross-Harbour Tunnel that links Hong Kong island to the Kowloon area, and a major highway between Kowloon and the rural New Territories.

Police fired tear gas near the tunnel early on Thursday to try to clear the protesters.

Thousands of students barricaded themselves inside campuses at several universities, preparing stockpiles of food, bricks, petrol bombs and other makeshift weapons as they hunkered down for possible clashes with police.

Masses of commuters queued at metro stations across the city after some rail services were suspended and roads closed. Some citizens, dressed in office wear, shouted at riot police who were deployed on station platforms.

Demonstrators are angry about what they see as police brutality and meddling by Beijing in the freedoms guaranteed under the “one country, two systems” formula put in place when the territory returned to Chinese rule in 1997.

China denies interfering and has blamed Western countries, including Britain and the United States, for stirring up trouble.

Police said on Wednesday violence in the Chinese territory had reached a “very dangerous and even deadly level”.

Authorities said on Thursday 64 people were injured during Wednesday’s clashes, which left two men in critical condition. There were no further details about the injuries they sustained.

Police said a man had died after falling from an unspecified height on Wednesday but gave no further details.

One woman, a 24-year-old worker caught in the traffic gridlock who gave her name as Kristy, said: “The government and the police have escalated the violence.”

“If the government wants the violence to stop they need to listen to our demands,” she said.

The city’s Education Bureau announced all schools would be shut on Thursday due to safety concerns, a decision that typically only happens during severe typhoons or natural disasters.

Several universities also announced there would be no classes on campuses for the rest of the year, while several major shopping malls said they would close on Thursday due to safety concerns.

BOTH SIDES “AT FAULT”

Lam said this week protesters paralyzing the city were “selfish” and were now the people’s enemy.

While protests have usually taken place on weekends leaving the city to get back to business as usual during the week, recent demonstrations have been hugely disruptive in the city of 7.4 million.

Pinky Lau, a 29-year-old finance executive who was among hundreds of people waiting to board a train at a station in the central government district, said protesters were disrupting transport only because the government was not listening.

“I’m hoping that the government will become a real government – a government that can help its citizens and listen to them.”

The early closures and termination of transport services has further weakened the city’s economy, which fell into recession for the first time in a decade in the third quarter. Retail and tourism have been hit hard by a fall in visitor numbers.

“Both sides (government and protesters) play a role in creating this result,” an office worker surnamed Chan said as she faced lengthy train delays to reach her work.

After initially supporting the protesters, she said they had now gone too far.

“I hope things will return to normal as soon as possible.”