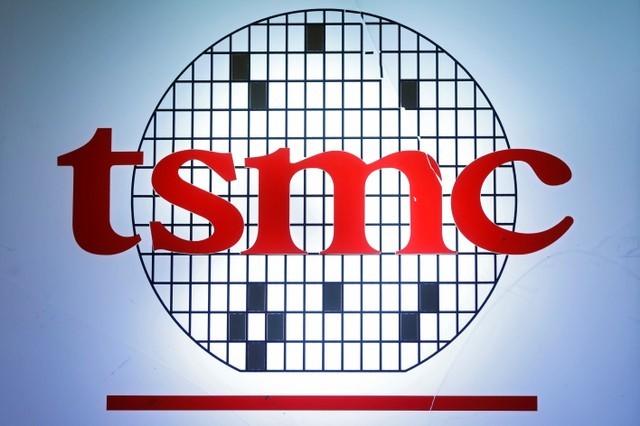 TAIPEI (Reuters) – Apple Inc supplier TSMC raised its 2019 capital spending plan by up to $5 billion on Thursday and forecast a nearly 10% rise in fourth-quarter revenue on strong demand for faster mobile chips and new high-end smartphones.

The logo of Taiwan Semiconductor Manufacturing Company (TSMC) is seen during an investors’ conference in Taipei, Taiwan April 13, 2017. REUTERS/Tyrone Siu

The bullish forecast by the world’s top contract chipmaker should ease investor fears of a global tech slowdown, as the world economic growth outlook has dimmed largely due to a 15-month trade war between the United States and China.

“5G smartphone growth momentum is stronger than we expected… We have good reasons to increase our capex this year and next year,” TSMC CEO C.C. Wei told an earnings briefing after reporting the Taiwanese company’s strongest quarterly profit growth in more than two years.

Wei said TSMC almost doubled its forecast for fifth-generation (5G) smartphone penetration for 2020 to mid-teen percent from a forecast of single digit made just six months ago.

Smartphone makers including Samsung Electronics Co Ltd and Huawei Technologies Co Ltd are racing to develop phones enabled with the 5G technology, which could be up to 100 times faster than current 4G networks.

TSMC, formally Taiwan Semiconductor Manufacturing Co Ltd, whose clients also include Qualcomm Inc and Huawei, raised its 2019 capex to a record $14 billion-$15 billion on Thursday from an earlier forecast of $10 billion-$11 billion.

TSMC reported a 13.5% rise in third quarter net profit to T$101.07 billion ($3.30 billion), its strongest growth since the first quarter of 2017, thanks to strong sales to smartphone makers.

The profit figure compared with a T$96.33 billion average forecast drawn from 20 analysts, according to Refinitiv data.

Sales earned from smartphone makers accounted for 49% of its total revenue, up from 45% from a year ago, while China sales amounted to 20%, up from 15%, making up for modest slowdown in every other major region including North America.

TSMC shares closed down 1% on Thursday prior to the earnings announcement. They have risen 28% so far this year, giving it a market value of $251.3 billion, bigger than U.S. rival Intel Corp’s $232 billion.

The Taiwan company’s strong results come after Huawei, the world’s No.2 smartphone maker, said on Wednesday it has shipped 185 million smartphones in the first nine months of the year.

That implies a 29% surge in Huawei’s third-quarter shipments, as it benefited from promotions and patriotic purchases in China that more than offset weak international sales on U.S. trade sanctions.

New smartphone launches ahead of the year-end shopping season, as well as rising demand for new technologies such as 5G and artificial intelligence will continue to drive sales for TSMC’s high-performance chips, known as 7nm, analysts said.