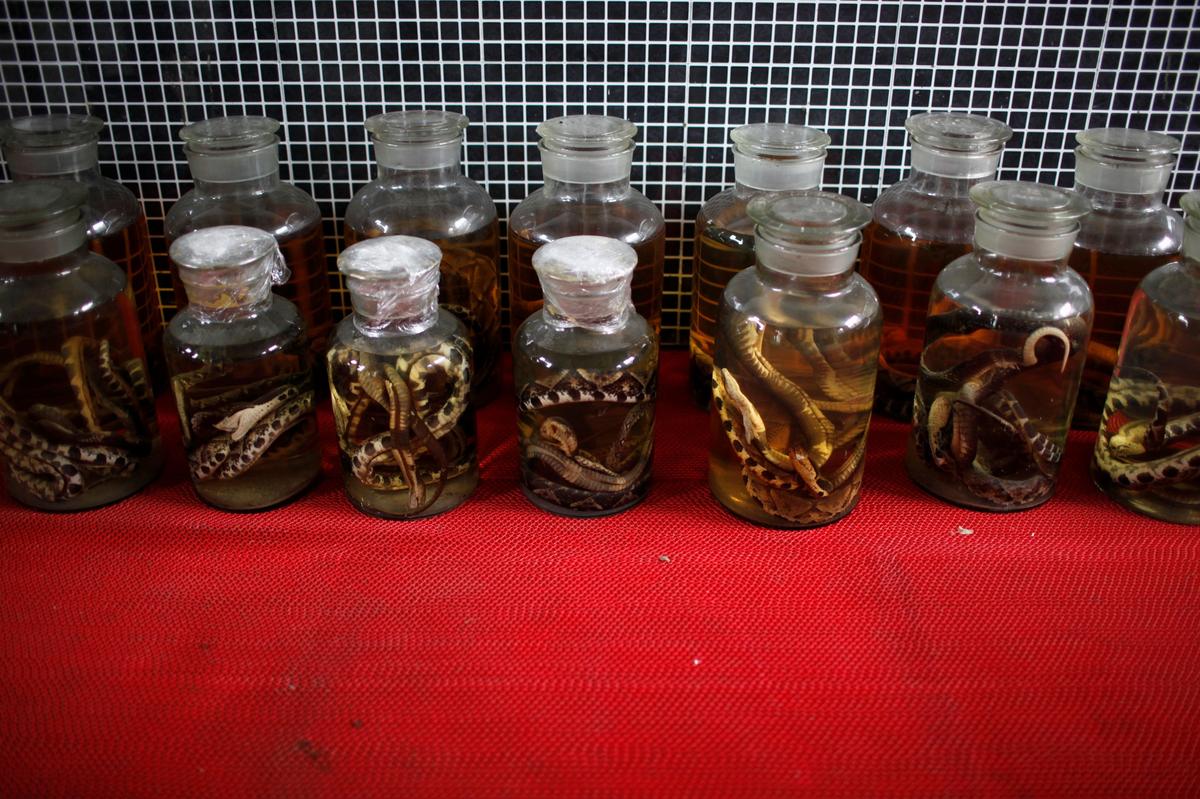 ZISIQIAO, China (Reuters) – Since China began frantic efforts to curb a coronavirus epidemic in late January, residents in the tiny snake breeding village of Zisiqiao have had to come to terms with a ban on wildlife trading, its lifeline for decades.

The Chinese character for “snake” has even been removed from the sign on the front wall of a specialty snake meat restaurant on the village’s edge.

“In the village now, there’s definitely no one breeding snakes,” said Yang Heyong, a 71-year old former breeder. “It must be because of the epidemic. Zhong Nanshan (China’s top medical adviser) has already said it is related to bats and snakes!”

Zisiqiao has been an unlikely centre of China’s snake industry for nearly four decades. It is dotted with small factory farms and its “snake culture” museum is a tourist attraction.

Snakes also form part of the village’s informal economy, with families keeping them in backyard holds to sell to restaurants or traditional medicine traders.

The global coronavirus pandemic is believed to have originated in exotic animals on sale in the Huanan seafood market in Wuhan.

The broad consensus suggests SARS-CoV-2 originated in bats, and early research suggested it reached humans via snakes, but many say pangolin – also on sale in the Wuhan market – are a more likely culprit.

China issued a temporary ban on the trade and consumption of wildlife on Jan. 23 and vowed to amend animal protection and epidemic prevention legislation to make that ban permanent. Thirteen provinces have implemented their own local regulations to ban wildlife consumption.

In Zisiqiao, built along the edge of a canal about 200 kilometres (120 miles) from Shanghai, snake breeding permits were cancelled in January. Winter is the off-season and breeding normally begins in April or May, so the economic impact hasn’t yet hit home.

While some residents said they expected restrictions to be relaxed once the crisis ends, government officials insisted they were permanent, and even if new licenses are issued later this year, the criteria will be far stricter.

“At the end of the epidemic, it still won’t be permitted,” said Lu Jinliang, vice-chief of the local village Communist Party. “They will have to switch professions, raise other species.”

Even before the coronavirus outbreak, the snake trade was under scrutiny.

A study by Wuhan University published last December looked at snakes collected from the city’s seafood markets, including the one blamed for the coronavirus pandemic.

China trades 7,000-9,000 tonnes of snake a year, and intensive farming may have enhanced the transmission of parasites and other infectious diseases, the study said.

However, Yu Xuejie, professor of the School of Health Sciences at Wuhan University and one of the study’s authors, told Reuters that he did not believe snakes were the origin of the coronavirus.

Another paper published last month said that while the virus originated in bats, genetic evidence suggests snakes may have been the intermediary species. However, its findings have been disputed, said Patrick Aust, research associate with the Department of Zoology at the University of Oxford.

“The source is most likely mammalian, probably bats but other suspects too, including pangolins,” he told Reuters, adding that there was no reason for snakes to be singled out as a health risk.

Animal welfare organisations have welcomed China’s wildlife ban, including the snake farming restrictions, and are urging the government to make it permanent. But no species should be singled out for blame, they said.

A snake farm with empty wooden slats is pictured after a ban on the trade and consumption of wildlife following the coronavirus disease (COVID-19) outbreak, in Zisiqiao village, Zhejiang province, China April 7, 2020. Picture taken April 7, 2020. REUTERS/Xihao Jiang NO RESALES. NO ARCHIVES.

“This is a disease issue: it is not just one animal’s problem or responsibility,” said Aili Kang, executive director of the Asia Program of the Wildlife Conservation Society, a non-government organisation

“This is not one species’ problem: it is a human problem.”

— For an interactive graphic tracking the global spread of coronavirus: here