Canada issued the lowest number of Invitations to Apply (ITAs) in the history of its flagship Express Entry selection system in the first half of 2022, as Ottawa tried to clear the backlog plaguing its entire immigration program.

The 2022 figure is just 10.2 percent of the 88,715 invitations issued last year, when Immigration, Refugees and Citizenship Canada (IRCC) ramped up ITAs to make up for a pandemic-related shortfall of new permanent residents.

What is Express Entry?

The good news is the suspension is set to come to an end on July 6, with the resumption of all-program draws for the first time since late 2020. The last CEC-only draw took place in fall 2021. 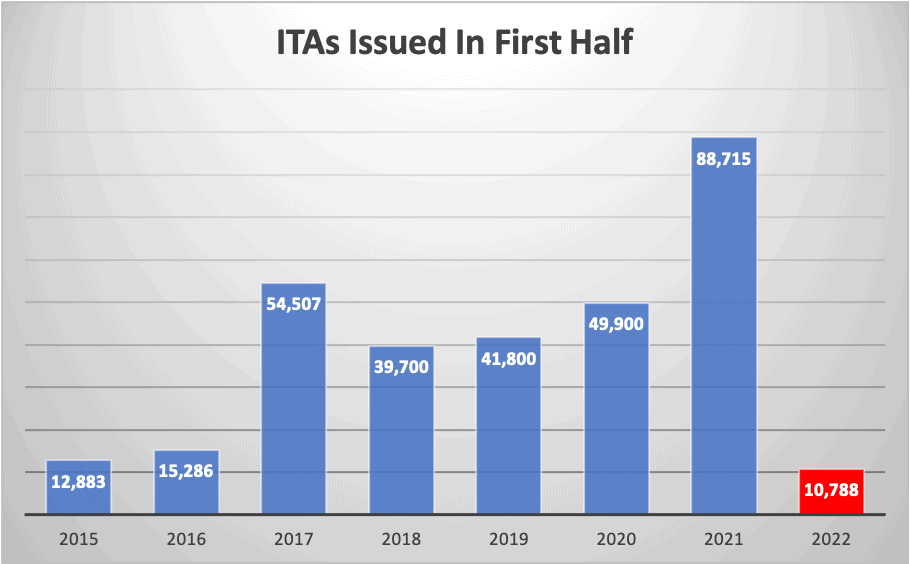 IRCC’s resumption of all-program draws comes as the backlog under the High Skilled immigration stream has been dramatically reduced, although the overall backlog including other permanent residence streams, plus temporary residence and citizenship, has swelled to well over 2.2 million applications.

Ottawa is working to clear that backlog, with Prime Minister Justin Trudeau recently setting up a task force with the aim of improving service delivery.

Increases are being caused by other programs, including the Temporary Residence to Permanent Residence (TR to PR) Pathway launched during the pandemic, and the Canada-Ukraine Authorization for Emergency Travel (CUAET), which promises to welcome an unlimited number of Ukrainians hit by Russia’s war.

With all-program draws resuming in July, the first half of 2022 will go down as the period Express Entry took a break, as Canada relied on its inventory of applications already received to supply a steady stream of new permanent residents, towards it target of nearly 432,000 newcomers this year.

Ottawa is already well on track to achieve this, welcoming nearly 150,000 newcomers up to the end of April. At the current pace, Canada could see 450,000 new permanent residents arrive in 2022.

Figures for the top 10 quarters for ITAs reveal exactly how low the total was in the second three months of 2022.

The first two quarters of 2021 set consecutive records for the most invitations in a quarter at 44,124 and 44,591 respectively, including the biggest draw in history in February 2021, issuing more than 27,000 ITAs.

Meanwhile, in six draws in April, May and June 2022, Canada issued just 4,318 invitations, putting it down among the lowest quarters on record.

It is not clear how many ITAs will be issued per draw when all-program draws resume in July, but it would seem likely that the quarterly records set in 2021 will stand for some time. 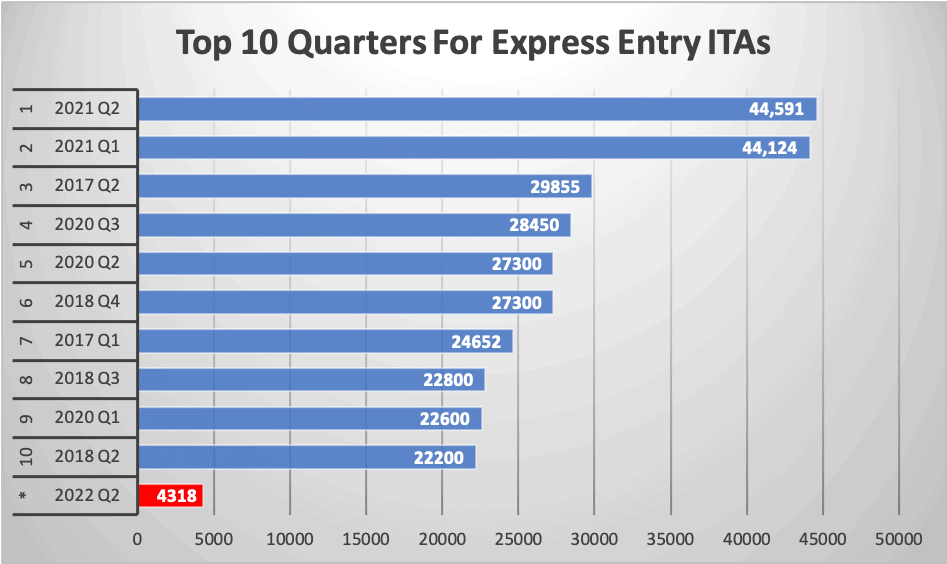 Although invitation records were set for PNP draws in the first quarter of the year, with several draws of more than 1,000 ITAs, the second quarter’s largest draw was 932.

Candidates for PNP invitations must come with a provincial nomination in hand, making them a much more exclusive group than those who qualify for the CEC and FSW programs. 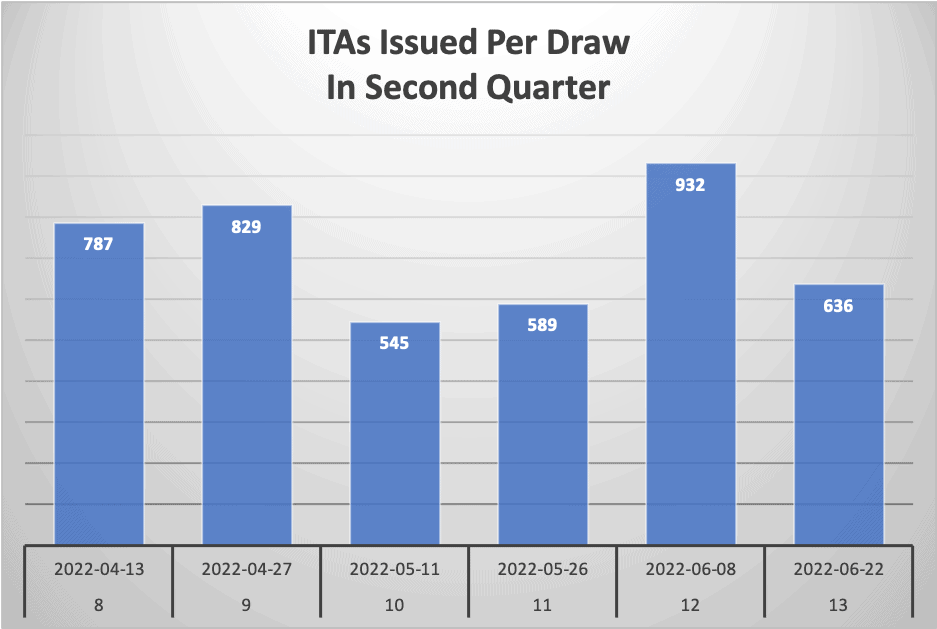 The six draws in the second quarter saw scores between 741 and 796, much higher than the scores in the low 400s often seen for CEC and all-program draws.

PNP candidates with nominations score an automatic extra 600 points on their profiles under Express Entry. It makes them effectively guaranteed an ITA when all-program draws take place and has the effect of driving up minimum scores when PNP-only draws take place.

For a minimum score of 796 in a PNP draw, as happened on June 8, the lowest-scoring candidate has only scored 196 on his or her core profile, adding a further 600 thanks to a provincial nomination. 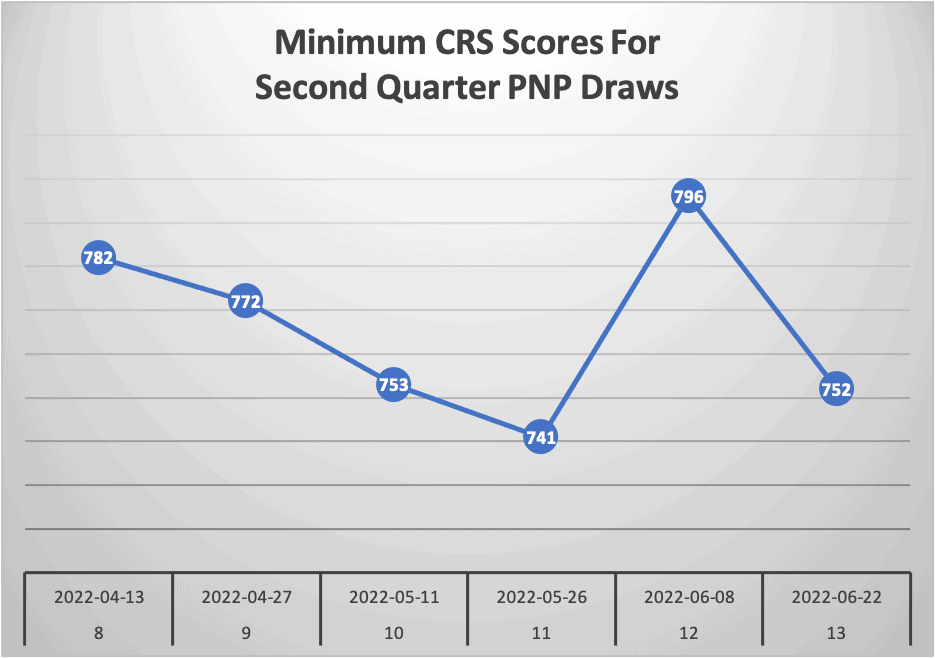 All eyes are on Canada Express Entry in the remainder of 2022.

Candidates abroad in the pool have been waiting since December 2020 for a chance to receive an ITA, when the last draw that included the FSW program took place.

On July 9, those candidates will finally get their chance to be invited.

It seems likely that the resumption of all-program draws will be done slowly and careful by IRCC.

Ottawa has guaranteed a return to the six-month processing standard for candidates who received ITAs from July.

It would therefore make sense to begin very carefully with the resumption of draws.

It has already been stated that Canada had enough High Skilled applications in the inventory to hit its target in that stream this year.

Ottawa, therefore, does not need applicants invited from July to arrive this year. Instead, IRCC is looking further ahead at hitting growing and ambitious immigration targets.