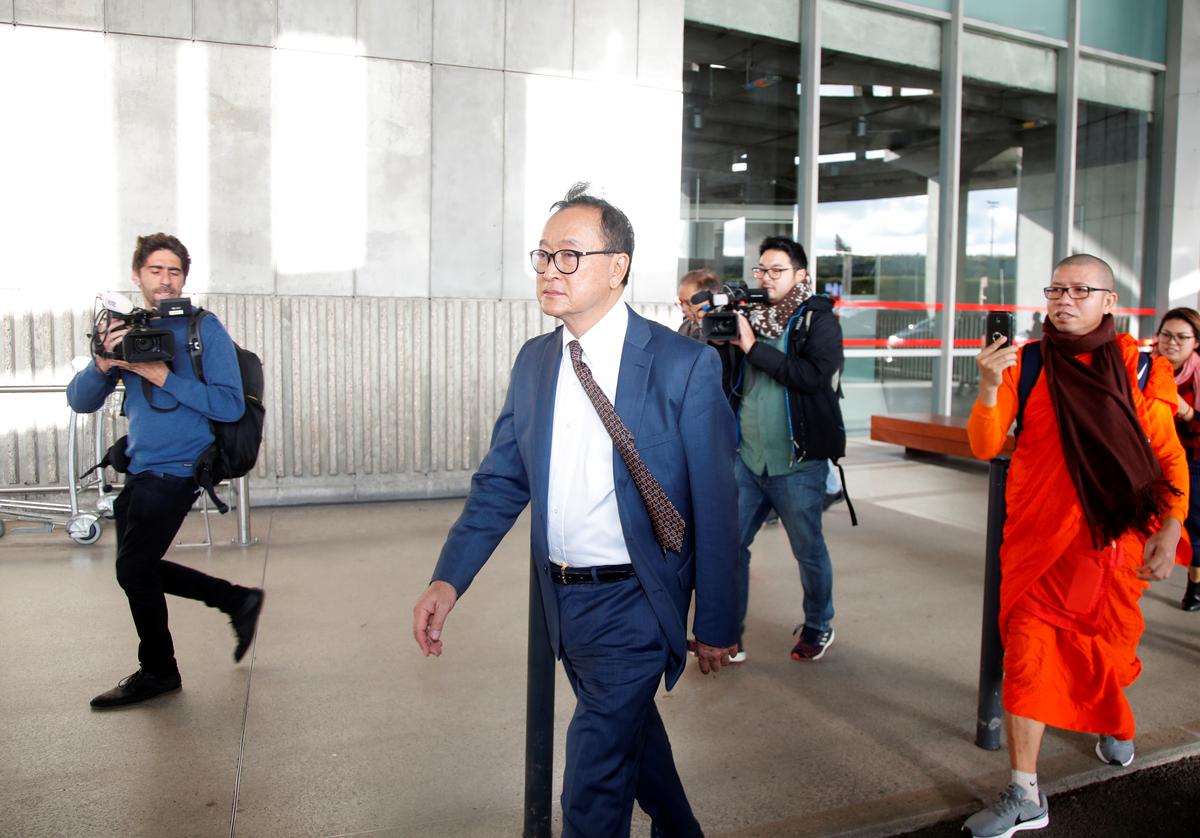 Cambodia’s self-exiled opposition party founder Sam Rainsy, who has vowed to return to his home country, leaves after being prevented from checking-in for a flight from Paris to Bangkok at Roissy Airport in Paris, France November 7, 2019. REUTERS/Charles Platiau

Sam Rainsy did not say where he was flying to in the Facebook post late on Friday after being blocked a day earlier from boarding a Thai Airways flight to Thailand, where he had said he would cross the border to Cambodia.

“Sam Rainsy boards a plane in Paris for another destination,” the post said below a photo of him in an airport terminal with a carry-on case.

Cambodian Prime Minister Hun Sen, whose government has arrested some 50 opposition activists inside Cambodia in recent weeks, has characterised the bid by Sam Rainsy and several colleagues to return and hold rallies as an attempted coup.

Government spokesman Phay Siphan said that if Sam Rainsy did return he would face outstanding charges against him in court.

“If he comes to cause instability and chaos, we will destroy him,” he told Reuters.

In Cambodia’s capital, Phnom Penh, security forces patrolled in pickup trucks on the day that marked Cambodia’s 66th anniversary of independence from France. On Sunday and Monday, Cambodia celebrates an annual water festival.

Police armed with assault rifles lined up at Cambodia’s Poipet border crossing with Thailand, where Sam Rainsy had said he planned to cross, pictures posted on Twitter by the independent Cambodian Center for Human Rights showed.

Sam Rainsy, a founder of the banned Cambodian National Rescue Party (CNRP), fled four years ago following a conviction for criminal defamation. He also faces a five-year sentence in a separate case. He says the charges were politically motivated.

Sam Rainsy, 70, a former finance minister who usually sports large, rimmed spectacles, has been an opponent of Hun Sen since the 1990s. He also vowed to return home in 2015 in spite of threats to arrest him, but never did so.

The CNRP’s leader, Kem Sokha, is under house arrest in Cambodia after being arrested more than two years ago and charged with treason ahead of a 2018 election that was condemned by Western countries as a farce.

The United States on Friday expressed concern over Cambodia’s crackdown on the opposition.

Before Sam Rainsy’s failed attempt to board a flight to Thailand, Malaysia detained his party’s U.S.-based vice president, Mu Sochua, at an airport before releasing her 24 hours later along with two other Cambodian opposition leaders detained earlier.

Rights groups have accused Malaysia, Vietnam, Cambodia and Thailand of detaining and returning critics of neighbouring governments, even those with United Nations refugee status.