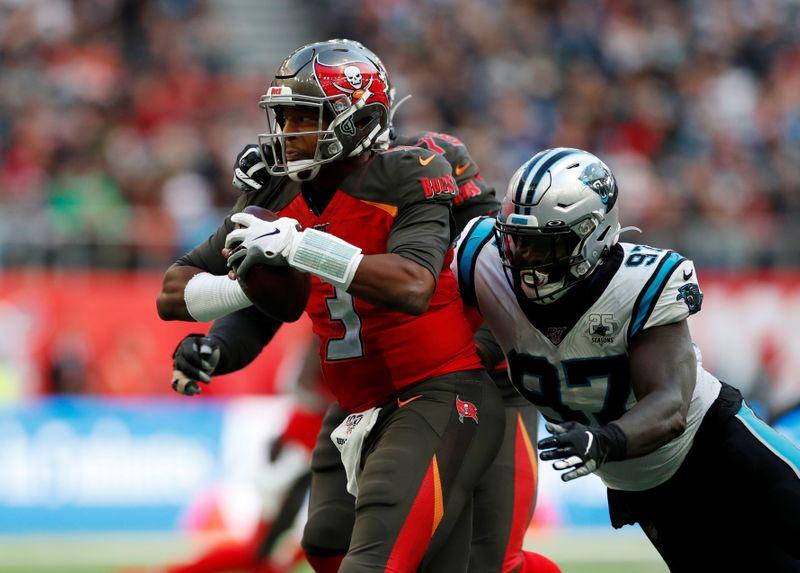 Jameis Winston was the No. 1 overall pick in the 2015 NFL Draft and the face of the Tampa Bay Buccaneers. Then Tom Brady became available. And the Buccaneers dove head over heels for Brady in free agency, signing the 42-year-old to a two-year deal that cleared the path for Winston to land on the unemployment line. “Well, obviously Tom is arguably the best quarterback to play the game, so it’s nice to have that guy,” Buccaneers general manager Jason Licht said Thursday. Winston won’t be back with the Buccaneers. He’s a free agent and said Wednesday it was an honor to be unseated by Brady.

But when the music stops after the draft and the total number of quarterback openings shrinks, there is some doubt as to where Winston might land. The former Florida State quarterback led the NFL in passing yards (5,109) and interceptions (30) last season. Winston has 121 career touchdown passes with 19,737 passing yards and just turned 26 in January.

By comparison, 2019 Heisman Trophy winner Joe Burrow turns 24 in December. Burrow is viewed as the top quarterback available in the 2020 draft.

“We have a lot of respect for Jameis,” Licht said. “Jameis was still part of our plan if things went a different route. I’ve got a lot of respect for him. I thought he did a lot of great things and I think anybody in our office, or our building, would say the same thing. He did some spectacular things for us. I would never say that personally – and I think I speak on behalf of the organization – that he was a bust. I think he’s got a bright future ahead of him. It just really comes down to, we had a chance to get Tom Brady. Tom Brady is a hell of a player and we are very excited about that. I’m very confident that Jameis is going to go on and get an opportunity. That’s not the last you’re going to hear from Jameis.”

He said publicly in February at the 2020 NFL Scouting Combine that the Buccaneers couldn’t faithfully commit to Winston without seeing “what’s behind Door No. 2.” As it turns out, No. 12 — Brady — was waiting behind that door.

The free agent market this offseason was highly unusual for veteran quarterbacks in that many were available. Drew Brees re-signed with the Saints, but Brady, Philip Rivers (Indianapolis Colts) and Marcus Mariota, drafted one pick after Winston by the Tennessee Titans, all found new homes. Mariota joined the Las Vegas Raiders as a backup to Derek Carr.

Entering the draft and minus a major injury, the only teams expected to be in the market for a potential starter are the Los Angeles Chargers and Miami Dolphins. The New England Patriots, Jacksonville Jaguars, Buffalo Bills and New York Jets are all thought to have interest in a prominent backup.

Winston was 28-42 as a starting quarterback and the Buccaneers never made the playoffs during his time with the franchise.