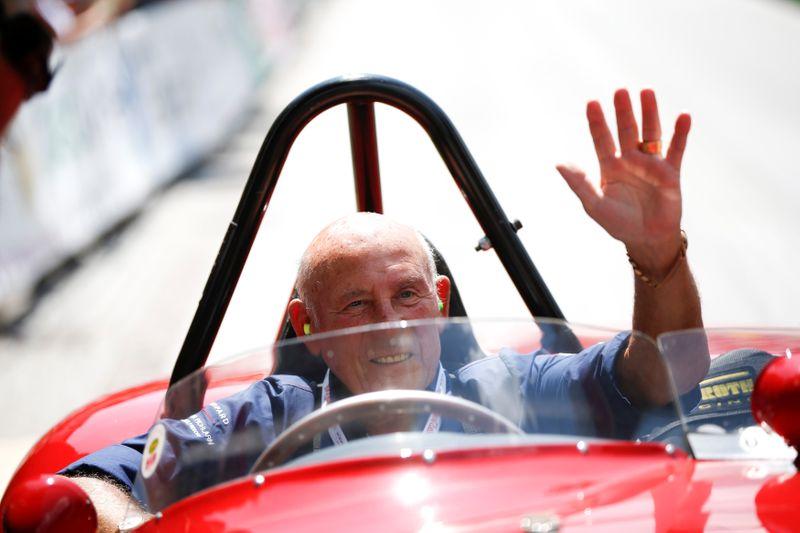 LONDON (Reuters) – Stirling Moss, the British racing driver who ranked as one of the all-time Formula One greats despite never winning the world championship, died on Sunday at the age of 90 after a long illness.

FILE PHOTO: Former English Formula One driver Stirling Moss waves to spectators as he sits in his 1955 Ferrari 750 Monza during the Ennstal Classic rally near the Austrian village of Groebming July 20, 2013. REUTERS/Leonhard Foeger

“He died as he lived, looking wonderful,” his wife Susie told the Daily Mail newspaper.

“He simply tired in the end and he just closed his beautiful eyes and that was that.”

A team mate at Mercedes to Argentine five-times world champion Juan Manuel Fangio, the Briton survived one of the deadliest eras of motorsport with 16 grand prix wins in the 1950s and early 1960s.

Four times a championship runner-up, and also third overall on three occasions, no other driver has won as many races without taking the title.

Moss was also the first Briton to win his home grand prix, beating Fangio at Liverpool’s Aintree circuit for Mercedes in 1955, with his name becoming a byword for speed for a generation of fans.

News of his passing was mourned across the world of motorsport, with Formula One hailing a ‘legend’ and ‘one of the true greats’.

“A prodigious competitor, supremely talented racer, and consummate gentleman, he leaves an indelible mark of greatness on the history of international motorsport,” said McLaren offering their condolences.

But for his sense of sportsmanship, Moss could have been Britain’s first ever world champion in 1958 instead of Mike Hawthorn.

He lost the title by a single point that year after asking stewards to reinstate his disqualified compatriot at the Portuguese Grand Prix.

“I felt that it was quite wrong and I went and gave evidence on Mike’s behalf and said no way should he be disqualified,” Moss, who won four races that year to Hawthorn’s one, told Reuters in an interview at his home in 2009.

Moss ended his professional career after an accident at Goodwood in 1962 left him unconscious for a month and paralysed for six months.

Knighted Sir Stirling Craufurd Moss in 2000 for services to motor racing, the London-born dentist’s son retired from all forms of motor racing only in 2011 when he was 81.

He regarded the 1961 Monaco Grand Prix as his greatest Formula One race but the 1955 Mille Miglia, a sportscar race on Italian public roads, was as memorable.

He covered the last stage, some 83 miles from Cremona to Brescia, at an average speed of 165.1 miles per hour from a standing start.

Moss was taken ill in Singapore in late 2016 and spent 134 days in hospital battling a chest infection.

He also survived a three-storey plunge down a lift shaft at his London home in March 2010, breaking both ankles and four bones in his feet.