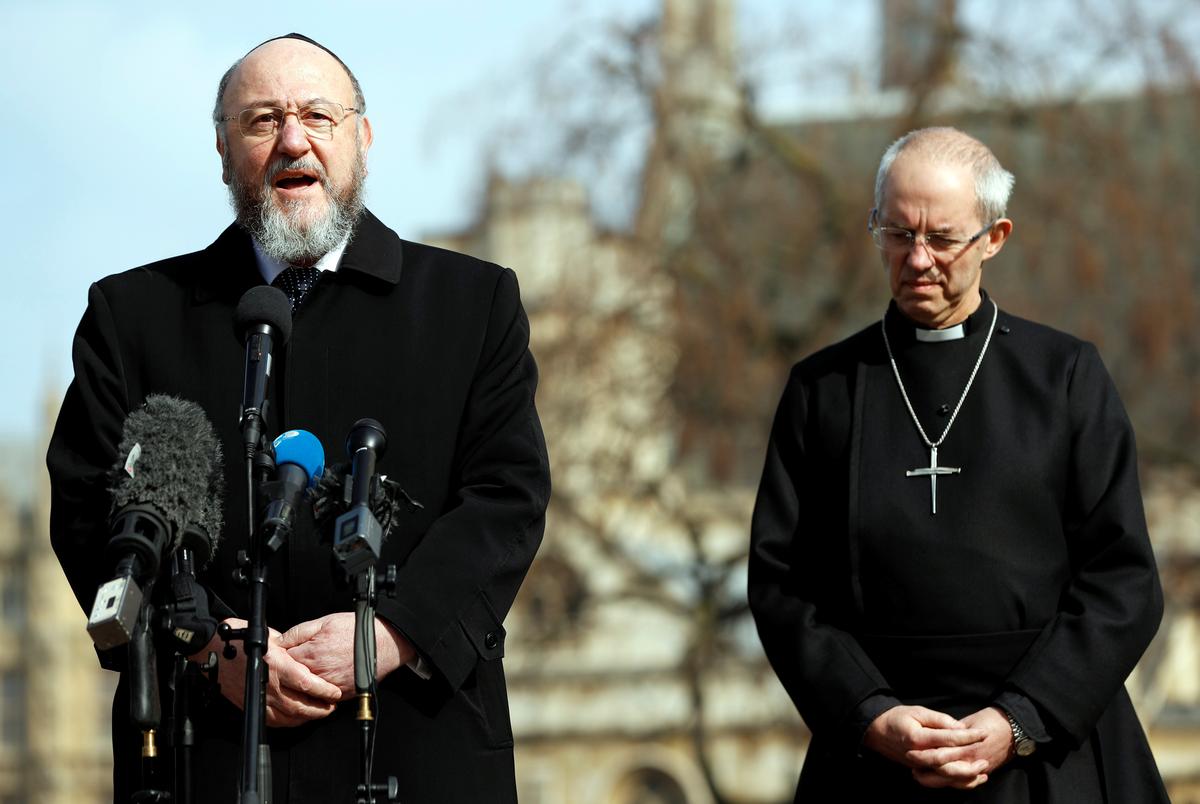 LONDON (Reuters) – Britain’s chief rabbi said opposition Labour leader Jeremy Corbyn was unfit to be prime minister because he had failed to stem anti-Semitism “sanctioned from the top” and now gripping his party.

His comments stirred up campaigning ahead of the Dec. 12 vote where the United Kingdom faces a stark choice between Prime Minister Boris Johnson offering Brexit and Corbyn proposing a radical socialist vision for the world’s fifth largest economy.

Chief Rabbi Ephraim Mirvis, in an article in The Times, questioned how complicit in prejudice an opposition leader would have to be to be considered unfit for office.

“It is a failure of leadership. A new poison – sanctioned from the top – has taken root in the Labour Party,” wrote Mirvis, of the United Hebrew Congregations of the Commonwealth.

“Be in no doubt, the very soul of our nation is at stake.”

Such an intervention from a religious leader is unusual.

Anglican leader Justin Welby said it was unprecedented and indicated the fear felt by many Jews.

Ever since Corbyn, a veteran campaigner for Palestinian rights, shocked the establishment by becoming Labour leader in 2015, he has been dogged by criticism from members, lawmakers and Jewish leaders that he has failed to tackle anti-Semitism.

He has repeatedly said he abhors anti-Semitism and supporters accuse foes of trying to make political capital.

However, nine of his lawmakers quit the party in February, citing the leadership’s handling of the accusations among their reasons, and in May Britain’s equality watchdog launched an investigation into possible discrimination by Labour.

Mirvis said Labour leaders’ response as their supporters drove lawmakers, members and staff out of the party for challenging anti-Jewish racism had been “utterly inadequate”.

Corbyn has also been criticised for the party’s delay in fully adopting the International Holocaust Remembrance Alliance’s definition of anti-semitism.

A Labour spokesman said Corbyn was a lifelong campaigner against anti-Semitism while the party was rooting out discrimination with suspensions and education programmes.

“A Labour government will guarantee the security of the Jewish community, defend and support the Jewish way of life, and combat rising anti-Semitism in our country and across Europe,” the spokesman said.

Alfred Dubs, who escaped from the Nazis in Czechoslovakia as a child in 1939, said the rabbi had gone a bit far.

“I don’t believe he’s (Corbyn) anti-Semitic even though under his leadership things have happened which should have been dealt with much faster,” Dubs told BBC Radio.

With just over two weeks until the election, a poll by Kantar showed Labour had squeezed the Conservative lead to 11 points from 18 over the last week.

Grime star Stormzy said it was important for voters to register by the end of Tuesday. “I will be voting for Jeremy Corbyn,” the rapper added, calling Johnson a sinister man.

That prompted British minister Michael Gove to quip that Stormzy was “a far, far better rapper than he is a political analyst.”