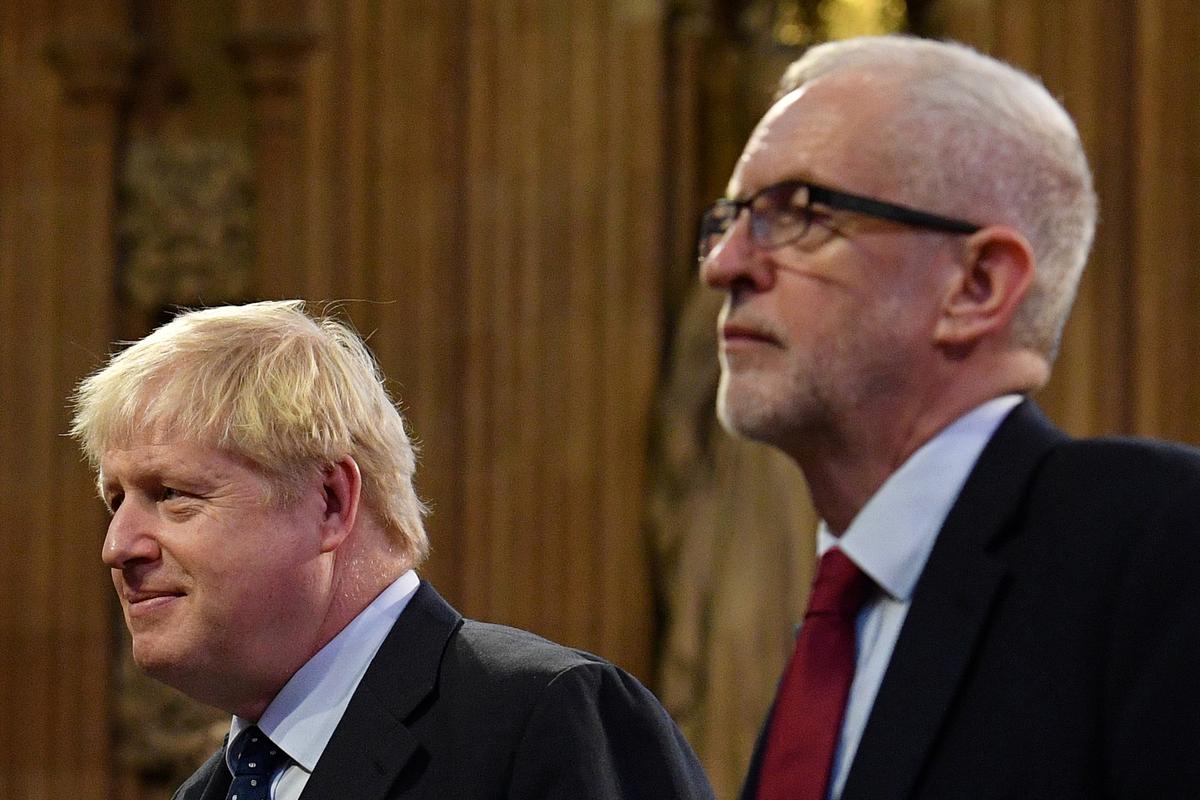 LONDON (Reuters) – Prime Minister Boris Johnson will travel to the heartlands of Brexit Britain in a final campaign blitz ahead of Thursday’s election, as he seeks to secure the parliamentary majority he needs to take the country out of the European Union.

FILE PHOTO: Britain’s Prime Minister Boris Johnson and main opposition Labour Party leader Jeremy Corbyn head the procession of members of parliament through the Central Lobby toward the House of Lords to listen to the Queen’s Speech during the State Opening of Parliament in the Houses of Parliament in London, Britain October 14, 2019. Daniel Leal-Olivas/Pool via REUTERS

“We have just three days to make that a reality, three days to break the deadlock and avoid a hung parliament … three days to get Brexit done,” he will say on Monday during a visit to Sunderland in the northeast of England.

The city was one of the first places to declare its residents had voted for Brexit after a referendum in 2016.

While Johnson has made the Dec. 12 election chiefly about ending the tortuous path to divorce from the bloc, his main rival, the Labour Party led by Jeremy Corbyn, has focused on promises of sweeping economic steps to benefit struggling Britons.

Labour will pledge on Monday to begin delivering its plans to end public spending cuts and begin nationalising industries within 100 days of taking office.

Johnson is ahead in opinion polls and forecast to win the 320 or so parliamentary seats he needs to finalise the EU divorce by Jan. 31. But, with many areas expected to be very tight contests, even a small change in public opinion could cost him an outright majority.

That would lead to a hung parliament that many expect to result in a temporary government led by Corbyn. This would mean the Labour leader had limited powers to enact his economic reforms, but would see smaller parties coalesce behind holding a second Brexit referendum.

Labour, which would need a huge last-minute swing in public opinion to claim a majority of its own, has promised to negotiate a new Brexit deal with the EU and then to give voters a choice between leaving under that deal or staying in the bloc.

Corbyn’s campaign has centred on appealing to voters who are frustrated after almost a decade of spending cuts by successive Conservative-led governments.

Labour is offering more public spending paid for by higher taxes on companies and the wealthy, hundreds of billions of pounds of infrastructure investment funded through borrowing, and a programme of nationalisation.

“When we win power it will be to give it to you,” Labour’s would-be finance minister John McDonnell will say during a speech on Monday.