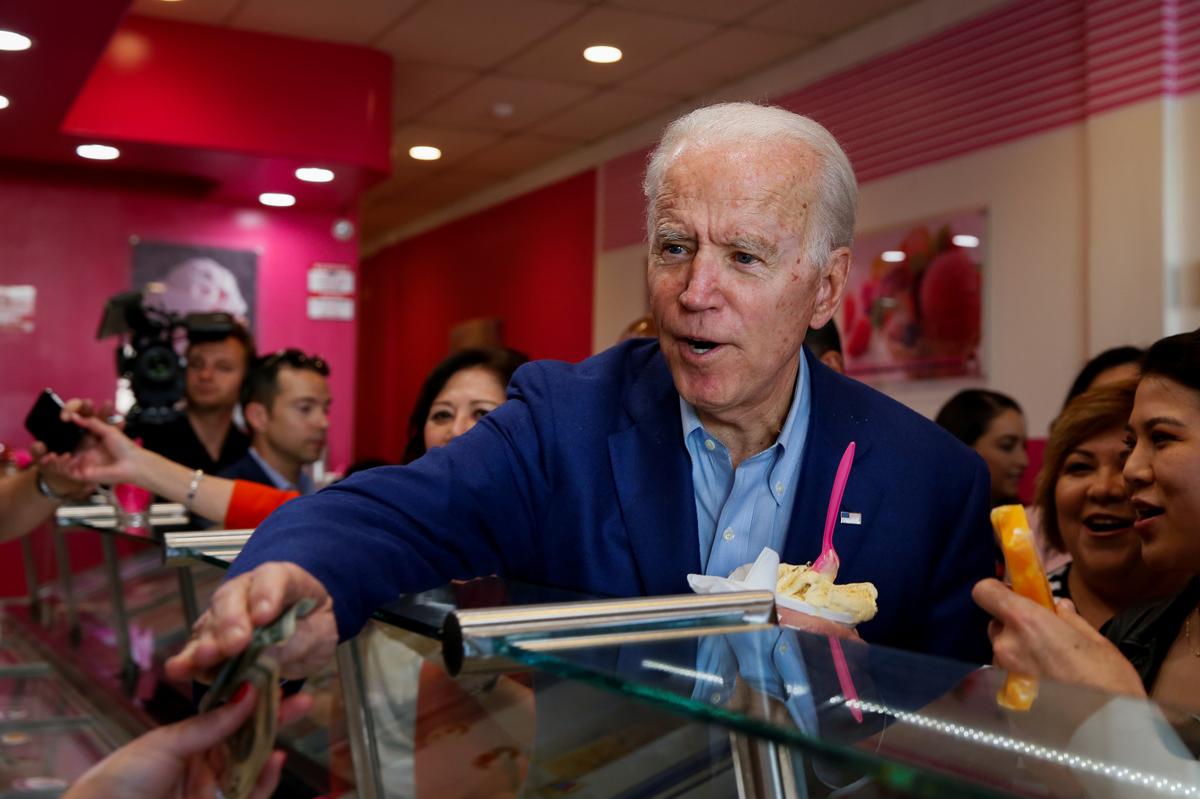 WASHINGTON (Reuters) – A resurgent Joe Biden rolled to projected wins in three large Southern states on Tuesday, getting off to a strong start on the biggest day of voting in the 2020 Democratic presidential nominating race.

Edison Research and television networks quickly called Biden the winner in Virginia, North Carolina and Alabama based on exit polls on Super Tuesday, when Americans in 14 states voted for a Democratic challenger to Republican President Donald Trump in the Nov. 3 election.

Front-runner Bernie Sanders was projected to win his home state of Vermont, an expected outcome for the democratic socialist and independent U.S. senator who hopes to take a huge step toward winning the nomination on Tuesday, when more than one-third of the delegates who will pick the eventual nominee at a July convention are up for grabs.

Biden, former President Barack Obama’s vice president, has enjoyed a burst of momentum since a blowout win in South Carolina on Saturday, which led to endorsements from a flood of prominent party officials and former rivals.

Biden is hoping to muscle aside Michael Bloomberg, the billionaire former New York City mayor, and consolidate support from moderates in Tuesday’s voting, turning the race into a one-on-one contest against Sanders.

Bloomberg was projected to win the U.S. territory of American Samoa, which also held its nominating contest on Tuesday.

With 30% of the precincts reporting in Virginia, Biden was winning more than half of the votes in that Southern swing state, well ahead of Sanders, who was winning about a quarter of the vote.

Early exit polls by Edison Research showed Biden was powered once again by strong support among African-American voters, winning more than six of every 10 in Virginia and North Carolina.

In Virginia, Biden won the votes of more than four of 10 white college educated women, compared to about two in 10 each for Sanders and Elizabeth Warren, the U.S. senator from Massachusetts.

The polls showed relatively few voters in the biggest voting state California and second-biggest Texas, about two in 10, made up their minds in the last few days, which could minimize Biden’s recent momentum.

But in Virginia and Massachusetts, about half of voters decided recently while one third of voters in North Carolina decided in the last few days, the polls showed.

A majority of voters in the Super Tuesday states said they were mostly looking for a candidate who can beat Trump, instead of someone who shares their values, the exit polls said.

Biden is trying to build a bridge between progressive Democrats’ desire for big structural change and more moderate Democrats yearning for a candidate who will be able to win over enough independents and Republicans to oust Trump.

That effort gained fresh momentum on the eve of Tuesday’s voting as moderate presidential rivals Pete Buttigieg, the former mayor of South Bend, Indiana, and Senator Amy Klobuchar of Minnesota, endorsed Biden after withdrawing from the race.

Bloomberg remains a wild card as he joins the competition for the first time. The moderate skipped the first four contests and spent more than $500 million of his own money to bombard Super Tuesday and later voting states with ads, but has seen his poll numbers slip after a poor first debate.

Asked by a reporter in Miami if he thought he risked spoiling Biden’s chances of winning the nomination, Bloomberg responded: “You think I’m going to siphon (votes) from him? He’s siphoning them from me.”

Warren, who was briefly the front-runner in the race last year, also remains in the hunt and hopes to score a victory in her home state of Massachusetts. Opinion polls show her trailing in other states.

The pace of the Democratic race begins to accelerate after Super Tuesday, with 11 more states voting by the end of March. By then, nearly two-thirds of the delegates will have been allotted.

Sanders headed into Tuesday with 60 delegates to Biden’s 54 in the state-by-state nominating fight. Sanders managed a virtual tie with Buttigieg in Iowa and wins in New Hampshire and Nevada.

Besides leading in polls in California, Sanders also is ahead of Biden by a smaller margin in polls in Texas. Sanders’ strength with Hispanics should pay dividends in that state, where Latinos comprise one-third of the Democratic electorate.

Biden, whose South Carolina win affirmed his popularity with black voters, hoped to win five states where African Americans make up at least a quarter of the Democratic electorate: Alabama, North Carolina, Virginia, Tennessee and Arkansas.

Other states voting on Tuesday are Colorado, Maine, Minnesota, Oklahoma and Utah. Democrats living abroad began voting in a primary set to run until March 10. The last polls will close in California at 8 p.m. PST (0400 GMT on Wednesday).