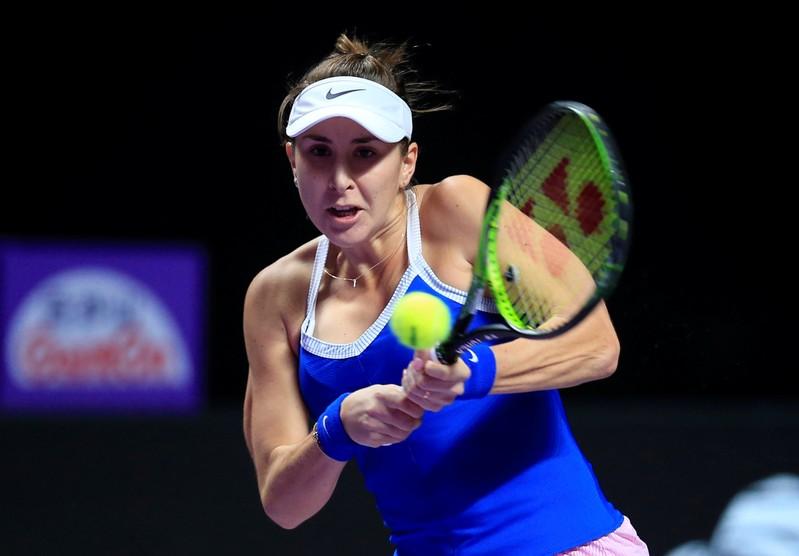 SHENZHEN (Reuters) – Switzerland’s Belinda Bencic questioned the quality of the court used at the WTA Finals as she became the latest player to pull out of the end-of-season championship on Saturday.

Bencic retired midway through the third set of her semi-final against holder Elina Svitolina to become the fourth player to withdraw at this year’s tournament, which is being played on a temporary hard court at the indoor Shenzhen Bay Sports Center.

“I was cramping,” said Bencic. “I started to feel it at the start of the second set, my hamstring. I called the physio. I started cramping in my foot and again in my hamstring.

“I really didn’t want to retire. I wanted to finish the match. It was not possible. I’m really disappointed about how my body failed me.

“I think these courts are really not ideal. You can see there were four retirements this week.”

The WTA Finals, being played in Shenzhen for the first time as part of a 10-year residency in the Chinese city, involves the eight highest-ranked players at the end of the season.

But three of the qualifiers – Naomi Osaka, Bianca Andreescu and Bencic plus alternate Kiki Bertens – were forced to pull out for one reason or another during the week-long event.

While Japan’s Osaka cited a shoulder injury for her withdrawal after the first round of group matches and Dutchwoman Bertens was ill, Canada’s Andreescu and Bencic suffered muscular or joint issues that ended their involvement.

Andreescu retired at the end of the first set of her second match in the round robin phase against Karolina Pliskova – and withdrew from the tournament a day later – when she jarred her knee attempting to complete a return of serve.

Bencic added: “I don’t think I could have done anything better. I think it was just a really long season. I’m exhausted obviously.

“I think these courts are terrible for movement of players and for the muscles because it’s like sand. You stop immediately, and it goes directly into your muscles. I think since the first practice, you can feel that in your body.”

Romanian Simona Halep, who was knocked out at the end of the group phase on Friday following her loss to Czech Pliskova, agreed that the speed of the courts was not ideal.

“We all are tired after a long year,” said the Wimbledon champion. “We have to do extra work on the shots and the points on this surface. But we have what we have, and that’s it. I’m not going to complain about that.”

Steve Simon, WTA chairman and CEO, said it would look to ensure the court was quicker for next year’s edition.

“The WTA in consultation with tournament partners and the court provider, go through a detailed process each year regarding the court surface and speed, taking into account player feedback throughout the season and after each edition of the tournament,” he said.

“Based on the feedback received this year it is my expectation that we will have a faster court in 2020.”