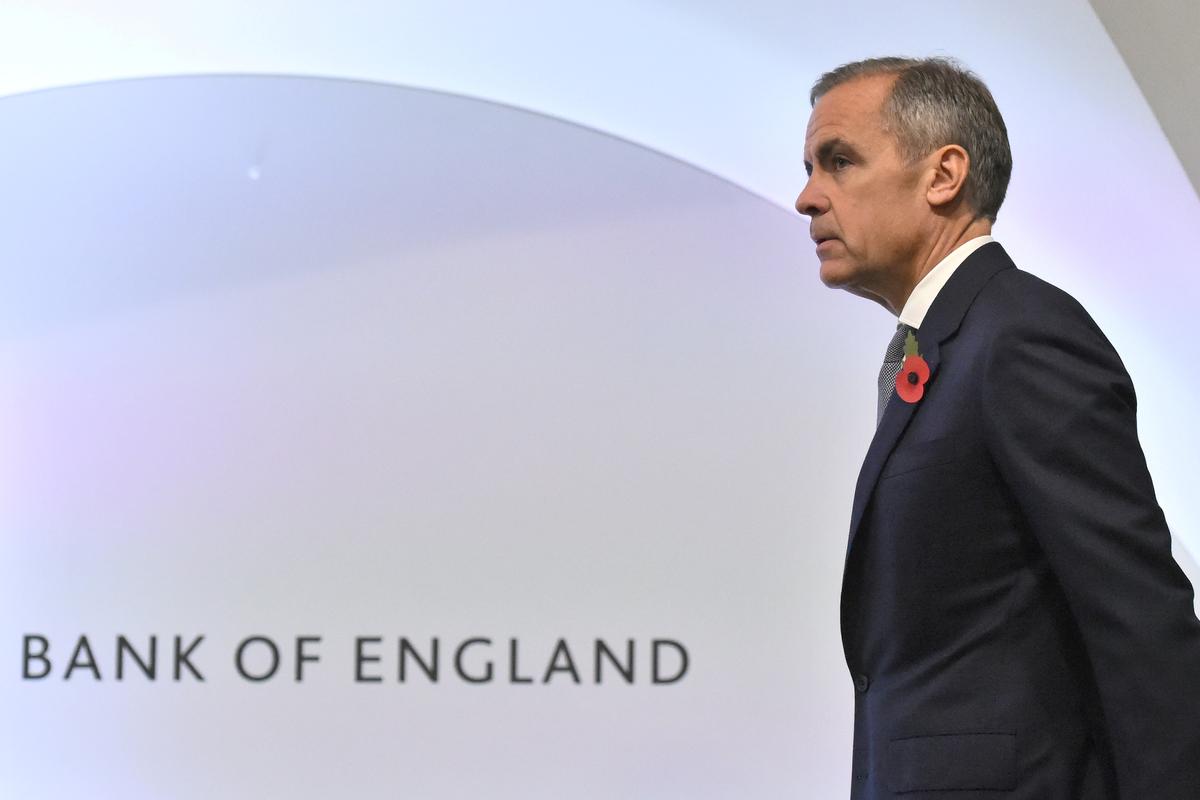 LONDON (Reuters) – Two Bank of England officials unexpectedly voted to lower interest rates on Thursday to ward off an economic slowdown, and others including Governor Mark Carney said they would consider a cut if global and Brexit headwinds do not ease.

Economists polled by Reuters had expected the BoE to vote unanimously to keep Bank Rate at 0.75%, and the announcement of the 7-2 split pushed sterling to a two-week low as market odds on a cut next year rose as high as 80%.

To date, the BoE has resisted following the U.S. Federal Reserve and the European Central Bank in cutting its main interest rate, but Thursday’s Monetary Policy Report positions the BoE for a change in stance.

Carney said the BoE’s central scenario was that a slowdown in global growth would stabilize and that Prime Minister Boris Johnson’s Brexit deal – which parliament has yet to approve – pointed the way to a reduction in Brexit uncertainty.

If this scenario unfolds, the BoE would still be able to stick to its long-standing message about limited and gradual rate hikes.

But if the outlook deteriorates, the BoE said a rate cut would become more likely.

For Monetary Policy Committee members Michael Saunders and Jonathan Haskel, it was already time to act – they cast the first votes for a rate cut since shortly after the 2016 Brexit referendum.

“In the short term at least, it seems the MPC is more concerned about the downside risks to growth and is prepared to pull the trigger on a rate cut if and when these risks materialize,” PwC economist John Hawksworth said.

The BoE is also grappling with uncertainty about an election which Johnson has called for Dec. 12, in a bid to get a majority to pass his Brexit deal before a new deadline of Jan. 31.

The two main political parties are promising to end years of austerity and spend billions on infrastructure – aided by record-low interest rates – to try to fuel growth.

Saunders and Haskel noted reduced job vacancies that suggested Britain’s hitherto strong labor market was turning as well as risks from the world economy and Brexit.

Other MPC members showed a new openness to cutting rates if things soured.

“If global growth failed to stabilize or if Brexit uncertainties remained entrenched, monetary policy might need to reinforce the expected recovery in UK GDP growth and inflation,” they said in a summary of their policy discussion.

They also softened their language on the need for limited and gradual rate hikes in the medium term, saying they “might” rather than “would” be necessary.

The BoE as a whole painted a darker picture for Britain’s economy over the next three years, predicting it will grow 1% less over the period than it had forecast in August, mostly due to a weaker global economy and a recently stronger pound.

But part of the growth downgrade reflected Johnson’s Brexit plans.

The BoE now assumes Britain will strike a trade deal that leads to new customs checks and puts up barriers to exports of financial and legal services.

The growth forecast would have been weaker still with higher spending announced by the government in September which the BoE said would add 0.4% to the economy.

FILE PHOTO: A bird flies past The Bank of England in the City of London, Britain, December 12, 2017. REUTERS/Clodagh Kilcoyne

Inflation, currently 1.7%, is forecast to drop to 1.2% in the middle of next year due to lower oil prices and regulatory caps on electricity and water bills.