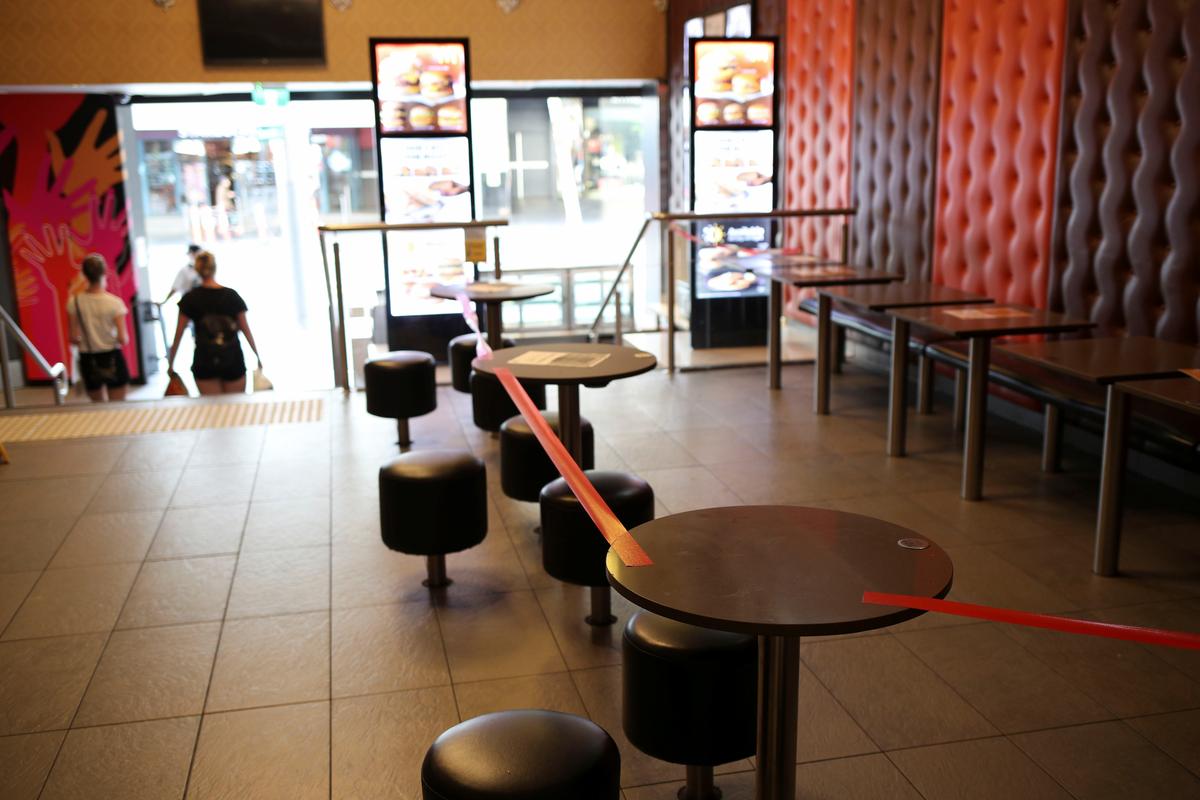 SYDNEY (Reuters) – Australian authorities will open a pop-up coronavirus testing clinic next to Sydney’s Bondi Beach on Wednesday as health workers try to contain clusters of infections across the country.

A closed McDonald’s dining is seen following the implementation of stricter social-distancing and self-isolation rules to limit the spread of the coronavirus disease (COVID-19) in Sydney, Australia, March 31, 2020. REUTERS/Loren Elliott

While strict lock-down measures are now in place in Australia, outbreaks of the disease have been detected in some communities, including Bondi, which made headlines in March when thousands of people were seen ignoring social distancing rules at its world-famous beach.

South Australia’s Barossa Valley wine-region has closed schools and facilities this week due to a localised outbreak, while six baggage-handlers working at the state’s Adelaide airport have also tested positive to COVID-19.

“Bondi is one of those places where we are seeing local transmission, and we have seen cases among backpackers in recent days,” New South Wales Health director Jeremy McAnulty said in Sydney on Wednesday.

The pop-up clinics are designed to ramp up testing in a dedicated area to help authorities contain the spread of the disease.

New South Wales (NSW), the country’s most populous state, remains the epicenter of the disease in Australia, accounting for almost half of the nation’s confirmed cases, which now exceed 4,500. There have been 20 deaths.

NSW Premier Gladys Berejiklian said on Wednesday there were early signs that virus case numbers in the state were stabilizing.

“We can’t let our foot off the pedal, we can’t relax,” Berejiklian said in Sydney.

“It doesn’t take long for things to get out of control.”

The rate of growth in new infections across the country has slowed to just under 10% over the past three days, from 25-30% a week ago, raising hopes that Australia is starting to “flatten the curve”.

Like many countries, Australia’s financial and jobs markets have been roiled by the outbreak, prompting the government to unveil several stimulus packages, including a A$130 billion ($79.9 billion) six-month wage subsidy.

While most virus cases have been detected in major cities, clusters have also emerged in regional towns and tourist destinations.

Barossa council mayor Bim Lange said schools in the wine-making area had been ordered to shut, and many other facilities closed, as a result of a localised outbreak, putting pressure on vineyards and other businesses involved in the grape-picking season.

“We’ve had three years of drought, and now this,” Lange told Reuters.