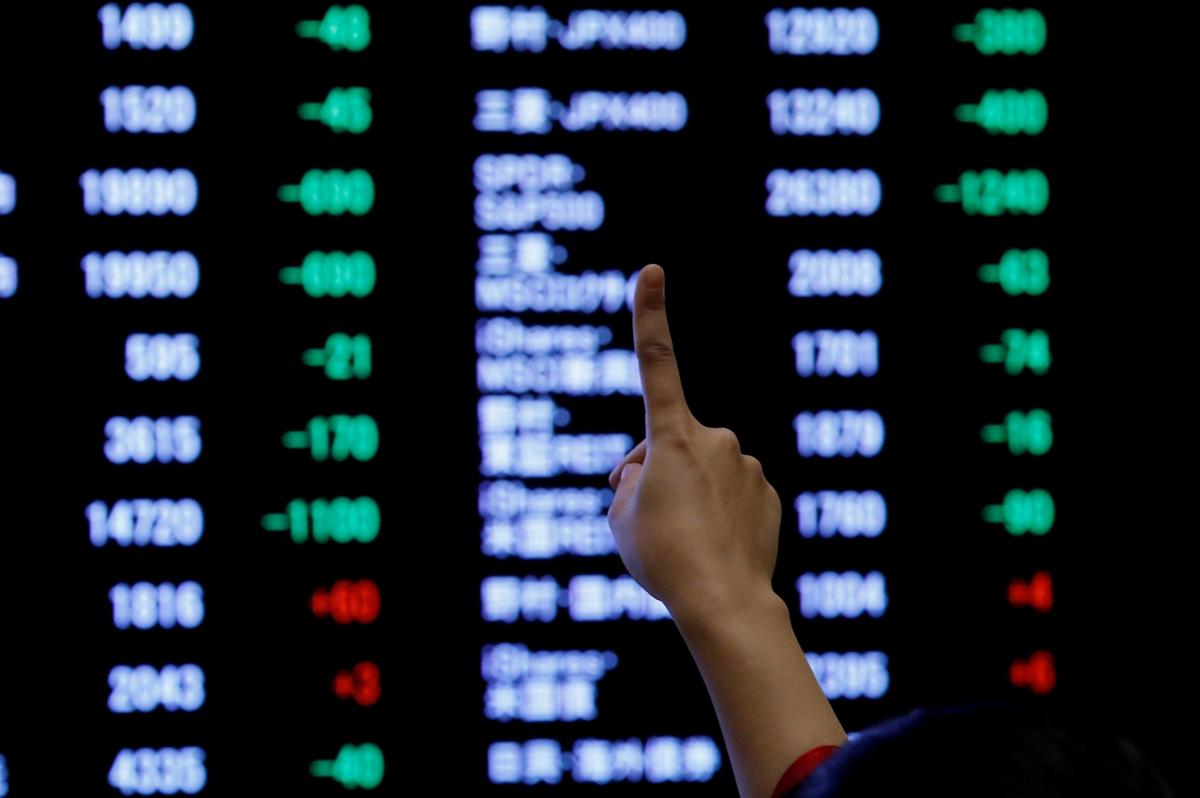 SYDNEY (Reuters) – Asian share markets jumped on Friday as a last-gasp Sino-U.S. trade deal and a likely major election win by Britain’s Conservative Party looked to have cleared a couple of dark clouds from the global horizon.

FILE PHOTO: A woman points to an electronic board showing stock prices as she poses in front of the board after the New Year opening ceremony at the Tokyo Stock Exchange (TSE), held to wish for the success of Japan’s stock market, in Tokyo, Japan, January 4, 2019. REUTERS

The double dose of relief slugged safe-haven sovereign bonds and the Japanese yen, even leading investors to scale back the chance of more interest rates cuts around the world.

“Global investors have been given two of the biggest gifts on their Christmas list and should be appreciative for a while at least,” said Sean Callow, a senior forex analyst at Westpac.

“Global equity indices such as MSCI World should set more record highs and sterling could push above $1.36.”

The pound hit its highest since mid-2018 as UK exit polls seemed to rule out a shock win by the left-wing Labour opposition, and could help clarify the outlook for Brexit.

A wave of trade euphoria had already lifted Wall Street to record highs. Reuters reported the United States has agreed to reduce some tariffs on Chinese goods and delay a tranche of tariffs as part of a phase one deal.

China also has agreed to make $50 billion in agricultural purchases in 2020 as part of the deal, that person and another U.S. source familiar with the talks said.

“If the U.S. cuts the current tariffs to some extent as reported, that is not something markets have priced in, so we could see a further leg up in the stock market,” said Norihiro Fujito, chief investment strategist at Mitsubishi UFJ Morgan Stanley Securities in Tokyo.

“The Conservatives appear to be on course for a big win. We are now finally seeing a clear direction on Brexit after three years of deadlock.”

Interest rate futures <0#FF:> slipped as investors priced in less chance of a rate cut from the Federal Reserve next year – a shift seen across a range of developed nations.

Other safe harbours also took a beating, with the yen sliding across the board. The dollar firmed further to 109.42 yen JPY= having risen 0.7% overnight.

The dollar also lost out to the Chinese yuan to hit an 18-week low as any truce would be seen as a boon for the export-heavy economy. The dollar was last at 6.9487 yuan CNH= having shed a steep 1.2% overnight.

Prepare to study in Canada
Study permit: Who can apply
How to Immigrate to Canada as a Business Development Officer
What Is A Canada Express Entry Profile?
Ottawa Invests $3m To Boost International Tech Start-Ups In Ontario
Temporary Foreign Workers Rocketing As Share Of Quebec’s Immigration Mix
Alberta Invites 150 Candidates, Lowest CRS Of 306 In New Express Entry Draw