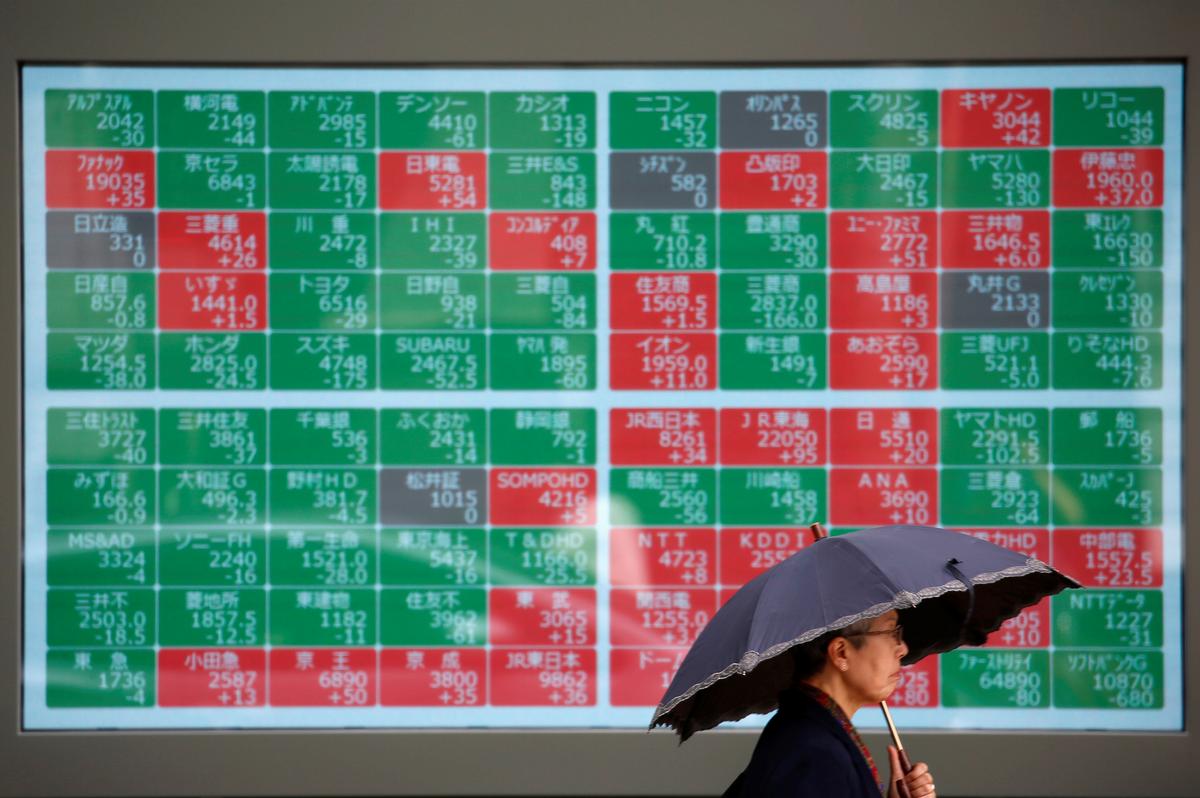 SYDNEY (Reuters) – Asian shares sank on Monday, the safe haven yen rose and gold jumped as fresh violence broke out in Hong Kong, while uncertainty still remained over whether the United States and China could end their damaging trade war.

FILE PHOTO: A passerby walks past in front of a stock quotation board outside a brokerage in Tokyo, Japan, May 10, 2019. REUTERS/Issei Kato

Hong Kong’s Hang Seng index .HSI led the losses in Asia, down more than 2%, after police fired live rounds at protestors on the eastern side of Hong Kong island. Cable TV and other Hong Kong media reported at least one protester being wounded. Video footage showed a protester lying in a pool of blood.

Japan’s Nikkei .N225 gave up early gains to drift away from a recent 13-month high after data showed the country’s core machinery orders fell for a third straight month.

That left MSCI’s broadest index of Asia-Pacific shares outside Japan .MIAPJ0000PUS down 0.5%.

“Hong Kong protests have been dragging on for a while and the view from the financial world is that it’s really starting to bite now. The further this drags on it’s certainly going to be very negative.”

In Asian hours on Monday, E-minis for the S&P500 ESc1 were 0.25% lower indicating a weak open later in the day.

Gold, which rises during times of uncertainty, rebounded from a three-month low touched on Friday to be last up 0.3% at $1,462.11 an ounce. XAU=

In currencies, the Japanese yen gained on the dollar to 109.01 while the Australian dollar, a liquid gauge for risk, was off slightly at $0.6853.

Market attention was also on the U.S.-China trade talks.

U.S. President Donald Trump told reporters on Saturday that talks with China had moved more slowly than he would have liked, but added that Beijing wanted a deal more than he did.

That was a more upbeat tone than just a few days earlier when he had stressed that the White House would not agree to a full rollback of existing tariffs, remarks that hit stock prices and the dollar.

“Despite his bluster that ‘China wants a trade deal more than I do’, markets sense that Trump is likely quite keen to call a truce on what is becoming a serious U.S. economic risk heading into the 2020 election year,” said David Bassanese, Sydney-based economist at Betashares.

By the close of Wall Street on Friday, optimism had returned to the market as investors bet that Washington needs a deal and it is in the interest of China, too. All three major U.S. indexes eked out record closing highs.

“It will be the U.S.-China trade talks that will continue to dictate the daily swings in sentiment this week,” said Jeffrey Halley, senior analyst at OANDA.

Halley noted the negotiations were “starting to drag on in a disturbingly Brexit-like manner,” referring to Britain’s divorce deal with the European Union which is still up in the air almost three years after the country voted to leave the bloc.

U.S. officials said a lot of work remained to be done when Trump announced the outlines of an interim deal last month, and Beijing has since pushed back on U.S. demands for big agricultural purchases, among other issues.

Analysts said the outlook for equities was highly dependent on U.S. economic data as a U.S.-China trade agreement would help bolster manufacturing and industrial sectors.

“The Hong Kong protests have seen a knee-jerk rotation out of risk positioning,” OANDA’s Halley said. “The effects are more likely to be passing than permanent…as long as the trade talks stay on target.”

Data on October U.S. industrial production and retail sales, along with the National Federation of Independent Business’s monthly small business survey, are scheduled for release this week.