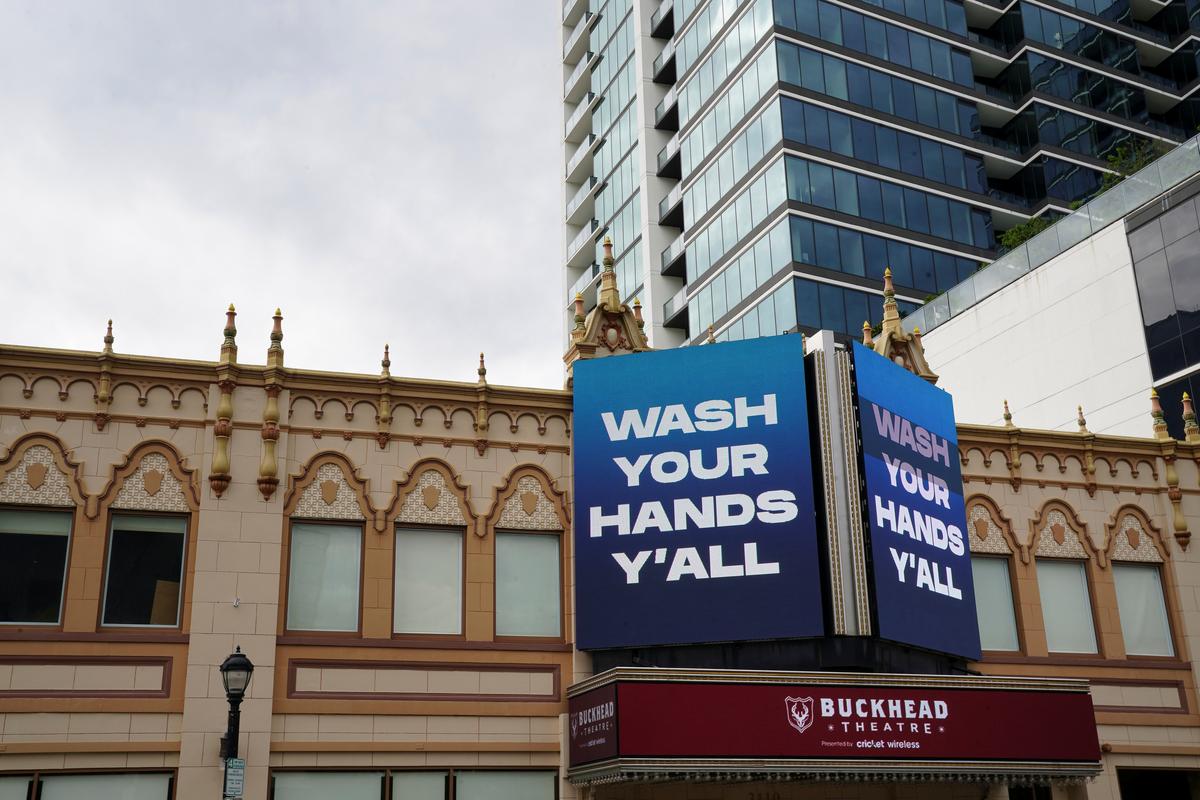 ATLANTA (Reuters) – With the U.S. coronavirus death toll nearing 50,000, Georgia pushed ahead with its plan to become the first state to allow an array of small businesses to reopen on Friday despite the disapproval of U.S. President Donald Trump and health experts.

FILE PHOTO: A message encouraging hand washing is seen above the Buckhead Theater days before the phased reopening of businesses and restaurants from the coronavirus disease (COVID-19) restrictions in Atlanta, Georgia, U.S. April 22, 2020. REUTERS/Elijah Nouvelage

Trump late on Thursday sparked fresh confusion over the prospects for treating COVID-19, the illness caused by the virus, suggesting that scientists should investigate whether patients might be cured by ingesting disinfectant.

Gyms, hair salons, tattoo parlors and some other businesses were cleared to open their doors by Georgia Governor Brian Kemp, who disregarded warnings from public health experts that relaxing restrictions could lead to a surge in infections of the novel coronavirus and more deaths.

Trump and Vice President Mike Pence more than once told Kemp they approved of his plan to lift restrictions before Trump reversed that stance and told a news conference this week he disapproved, the Associated Press reported on Thursday, citing two administration officials.

Georgia has become a flashpoint in the debate over how quickly the country should get back to work.

It is the first state to embark on a widespread reopening, although Oklahoma was also opening some retail businesses on Friday, Florida started allowing people to visit some of its beaches last Friday, South Carolina began to ease restrictions on Monday and other states will relax guidelines next week.

The lockdowns have exacted a severe toll on the economy, with U.S. Labor Department data released on Thursday showing 26.5 million Americans had sought jobless benefits over the last five weeks.

Despite the lost revenues, not all businesses are jumping at the chance to reopen. Shay Cannon, owner of Liberty Tattoo in Atlanta, Georgia, said he would reopen in May by appointment only and did not foresee a return to normal until June or later.

“We are not opening today, we feel it is too soon,” Cannon told Reuters. “We’re just watching the numbers and doing what seems right to us.”

Atlanta Mayor Keisha Lance Bottoms, who has repeatedly criticized Kemp’s push to reopen businesses, told the ABC News “Good Morning America” program that Georgia did not have the hospital capacity to handle the outbreak and warned of a second wave of cases.

“It’s necessary that we continue to distance ourselves,” she told ABC. “There are some who are willing to sacrifice lives for the sake of the economy and that’s unacceptable to me.”

The number of Americans known to be infected surpassed 875,000, with nearly 50,000 deaths from COVID-19, the highly contagious respiratory illness caused by the coronavirus, according to a Reuters tally.

According to a model maintained by the Institute for Health Metrics and Evaluation (IHME) at the University of Washington, which is used by the White House, hospitalizations in Georgia will peak next week and should not open until June 22.

Oklahoma plans to open hair and nail salons, barber shops and other personal care businesses on Friday, and will expand the easing of restrictions to restaurants, churches and gyms on May 1. Governor Kevin Stitt has said businesses need to maintain space for customers to adhere to social distancing guidelines.

With far fewer cases and deaths than Georgia, the IHME model predicts that Oklahoma already hit its hospitalizations peak on Tuesday and could loosen restrictions on June 17.

Barber Tommy Thomas, 69, who has been cutting hair for 50 years, gives his long-time customer Fred Bentley a haircut after the Georgia governor allowed a select number of businesses to open during the coronavirus disease (COVID-19) restrictions in Atlanta, Georgia, U.S. April 24, 2020. REUTERS/Julio-Cesar Chavez

At his media briefing on Thursday, Trump said scientists should explore whether inserting light or disinfectant into the bodies of people infected with COVID-19 might serve as a “cleaning” and clear the disease.

The comments prompted doctors and health experts to issue warnings to the public not to drink or inject disinfectant, while Lysol and Dettol maker Reckitt Benckiser (RB.L) felt compelled to issue a statement of its own.

“Under no circumstance should our disinfectant products be administered into the human body (through injection, ingestion or any other route),” the company said.