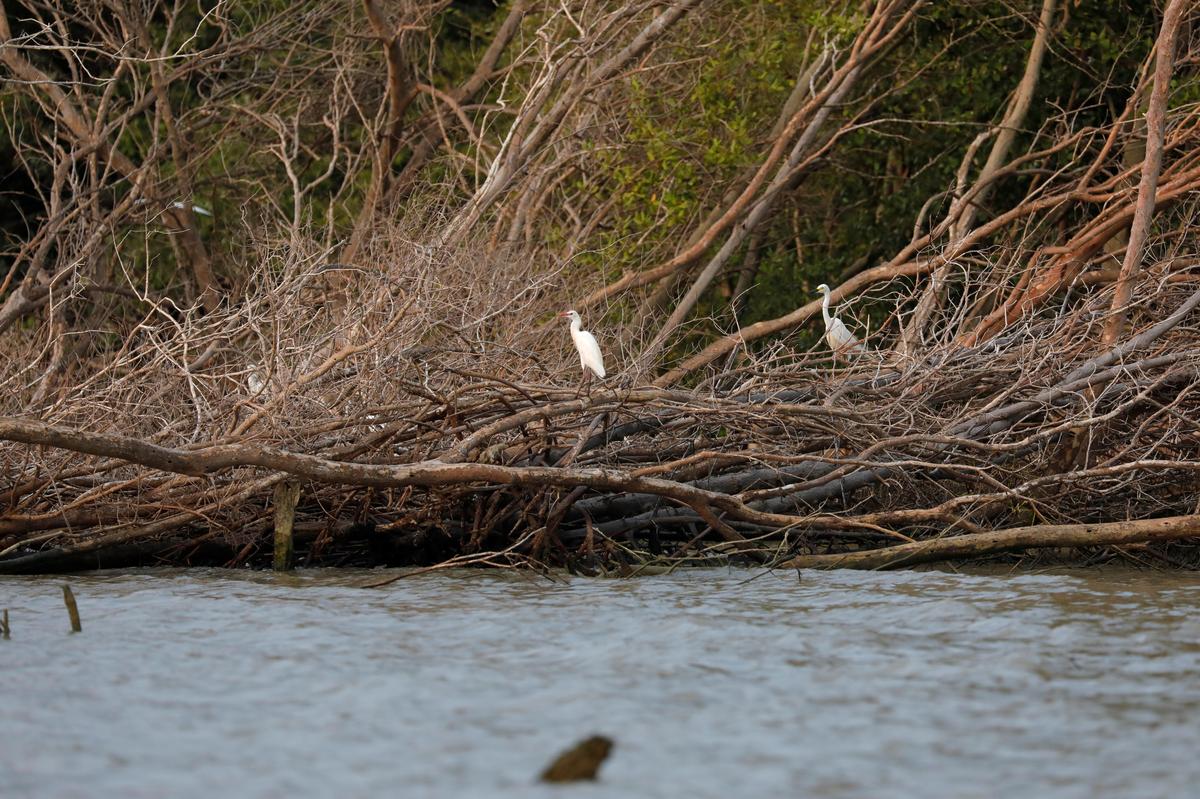 TAMBAKLOROK, Indonesia (Reuters) – Indonesian fisherman Miskan says the once-abundant catches he used to enjoy have been dwindling in recent years on this stretch of the Java Sea.

His meager income is being further strained by having to borrow cash to shore up his home against lapping waves coming further inland on this vulnerable coastline.

“If you have a house on land and then work at sea, it’s hard. But now I work at sea and I live at sea,” said Miskan, 44, who uses one name, speaking outside his small home, where a caged songbird hangs from the rafters.

His community’s battle against inundation, blamed on both man-made environmental destruction and the impact of climate change, reflects the risks posed to millions of people by a sinking coastline on Indonesia’s most populous island of Java.

The flooding in Tambaklorok in Central Java province is now so bad that Miskan uses a window to enter his home since his door is half blocked by dirt piled up to keep out the sea.

“It’s hard to save money when you’re a fisherman,” he said.

Miskan had to borrow from neighbors to pay roughly 7.2 million rupiah ($500) to hire workers to truck in earth.

Thousands of people in Asia and Europe joined rallies demanding more action on climate change on Friday, aiming to force political leaders to come up with urgent solutions at a United Nations conference that starts on Monday.

Indonesia, an archipelago of thousands of islands, has about 81,000 km (50,300 miles) of coastline, making it particularly vulnerable to climate change along with neighbors like the Philippines.

It is also home to more than a fifth of the world’s mangrove forests, which naturally help keep out high tidal waters. But for years, coastal communities have chopped down mangrove forests to clear the way for fish and shrimp farms, and for rice paddies.

The government has scrambled to work with environmental groups to replant mangroves, build dykes and relocate threatened villages.

But many residents, often poor fishermen, are either reluctant to leave their homes or simply have nowhere to go further inland on Java, home to around 140 million people.

“It is impossible for us to move due to economic reasons, so even though there’s tidal floods, I’ll stay,” said Abdul Hadi, whose house in Tambaklorok is now below sea levels and the road.

Another villager, Solihatun, 51, regularly needs her roof removed so that the height of the walls can be raised as earth is spread in and around her house. She says the flooding is sometimes so bad her grandchildren can swim in the living room.

“Thank God for bank loans, so it’s easier to pay off the debt every month,” she said, adding she had spent over 5 million rupiah for the last renovation.

Feri Prihantoro of the Bina Karta Lestari Foundation, a non-government organization (NGO) focused on sustainable development, said the area’s coastline was particularly vulnerable to flooding and high tides due to land subsidence because of the extraction of underground water and higher sea levels.

Further along the Java coast, Jakarta is also prone to flooding with two-fifths of the city lying below sea level.

With this partly in mind, President Joko Widodo announced in August a $33 billion plan to move the capital to Borneo island.

Prepare to study in Canada
Study permit: Who can apply
Ontario Invites 10 Canada Immigration Candidates In New Entrepreneur Draw
Ontario Masters Graduate Draw: Province Issues 692 Canada Immigration Invitations
Here Are The Top 15 Jobs In Canada For 2023
Bus Drivers Can Now Immigrate To Canada Through Express Entry
What You Should Know About Targeted Express Entry Draws in 2023