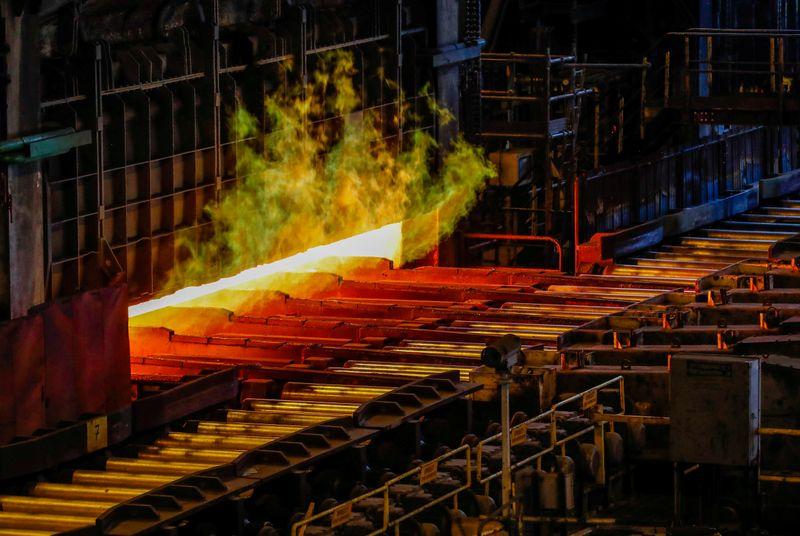 LONDON (Reuters) – The world’s biggest steelmaker ArcelorMittal (MT.AS) announced plans on Friday to cut emissions by 30% at its European operations by 2030, two days after the European Union laid out its program to be carbon neutral by 2050.

FILE PHOTO: A red-hot steel plate passes through a press at the ArcelorMittal steel plant in Ghent, Belgium, May 22, 2018. REUTERS/Yves Herman

ArcelorMittal also said it aimed to publish a target for the whole group in the middle of next year.

The steel industry is responsible for about 7% of global emissions. Pressure is mounting on the sector, especially in Europe, to reduce its climate impact as the new European Commission, in office since the start of December, has made carbon neutrality the top priority.

“Our roadmap and the emissions reduction target of 30% by 2030 for Europe is a big step in the right direction,” Geert Van Poelvoorde, CEO ArcelorMittal Europe – Flat Products, said in a statement.

The target for a 30% cut from 2018 levels covers flat steel products, which form the bulk of ArcelorMittal’s European output and are used in industries such as carmaking and construction.

The Commission has said it will start work immediately on a levy on imports with higher carbon footprints than EU-made products.

ArcelorMittal said its emissions roadmap included steelmaking using clean energy, such as hydrogen, rather than fossil fuel, as well as carbon capture and storage, which involves capturing the emissions from traditional steelmaking and storing them or re-using them in industrial processes.

Efforts to implement carbon capture and storage have failed for years to reach commercial scale, but ArcelorMittal says a project in Ghent, Belgium, to capture waste gases from a steelmaking blast furnace and convert them into bio-ethanol will be completed in 2020.

It says technology to replace coal in steelmaking with hydrogen is further away from commercial operation.

Swedish partners LKAB, SSAB (SSABa.ST) and Vattenfall say they have one of the most advanced hydrogen projects – HYBRIT. They aim to produce fossil-free steel by 2026 and to use the technology widely by 2035.

Across Europe, steelmakers are testing ways to reduce carbon emissions as financial analysts say it is becoming essential to eliminate fossil fuel and clean up supply chains to attract investors.

Climate talks meant to conclude this week in Madrid, have highlighted the discrepancy between the urgent change scientists and campaigners say is necessary and the reluctance of some nations and businesses to tackle economic and business reform.

Prepare to study in Canada
Study permit: Who can apply
Ottawa Invests $3m To Boost International Tech Start-Ups In Ontario
Roe vs Wade: How Disenfranchised Americans Can Immigrate to Canada
What Is A Canada Express Entry Profile?
Spike in Canadian Immigration Due to New US Abortion Restrictions
Alberta Invites 150 Candidates, Lowest CRS Of 306 In New Express Entry Draw