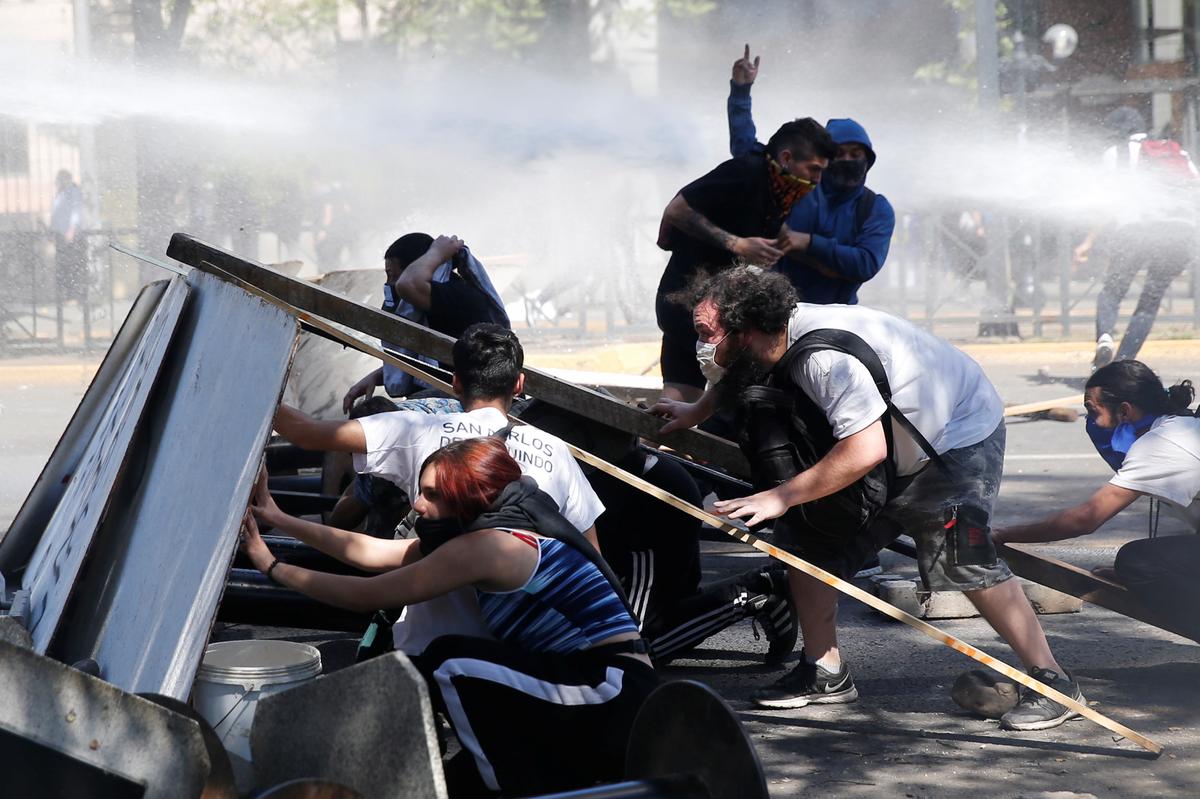 By Dave Sherwood and Natalia A. Ramos Miranda

Demonstrators protect themselves from a police water cannon behind a barricade during a protest against Chile’s state economic model in Santiago October 21, 2019. REUTERS/Edgard Garrido

SANTIAGO (Reuters) – Thousands of Chileans poured into Santiago’s central squares Monday to protest high living costs after a weekend of looting, arson and clashes with security forces killed 11 people and prompted President Sebastian Pinera to declare the country “at war” with vandals.

Buses and metro networks were partially restored for people to return to work but many opted instead to join the biggest demonstrations in years in what is normally one of Latin America’s most stable countries.

The crisis was sparked by protests over a hike in public transport fares but reflects simmering anger over intense economic inequality in Chile, as well as costly health, education and pension systems seen by many as inadequate.

Banging drums and pans, blowing whistles and many waving signs calling for Pinera´s ouster, the largely youthful and peaceful crowd filled Santiago’s Plaza Italia and overflowed into surrounding streets, watched from the sidelines by soldiers and police and hovered over by helicopters.

Jose Jimenez, 33, a filmmaker who had joined the protest, told Reuters it was hard to predict what would come next.

“Something has broken,” he said. “The government has shown itself to be completely inept and until there’s a way to respond to or contain this situation I think it’s only going to keep growing.”

Camila Tapia, a 23-year-old student from the poor La Pintana neighborhood of Santiago said she was there to represent her elderly parents, former manual laborers.

“I am here because of my parents and because of my son, because we can’t take it anymore, we are tired of injustice,” she said. “And it is everything: health, education, housing…”

A fresh curfew was announced by Javier Iturriaga, the general in charge of Santiago’s security, to run from 8 p.m. on Monday until 6 a.m. on Tuesday in the city.

Several Chilean cities have been placed in a state of emergency, with control handed to the armed forces after looting, arson attacks and violent clashes began on Friday.

Both the peso and the country’s IPSA blue-chip stock exchange closed down on Monday following the clashes.

Officials late Sunday said the country’s copper mining industry, the world’s largest, was operating normally, though the union of BHP’s Escondida copper mine workers announced a day-long strike on Tuesday in solidarity with the protests.

Finance minister Felipe Larrain said the civil unrest would “undoubtedly” have a “significant” impact on the economy.

Dr. Jaime Manalich, the health minister, said 239 civilians had been injured in three days of unrest, while the death toll was updated to 11. Interior Minister Andres Chadwick said one man had died from gunshot injuries in the northern province of Coquimbo.

Pinera and his ministers have said the vandalism and arson attacks on businesses and property are coordinated.

“We are at war against a powerful enemy, who is willing to use violence without any limits,” Pinera said in a late-night televised statement at army headquarters in Santiago.

“That obviously reflects an intention … to cause harm to citizens in their daily lives,” Chadwick said.

U.N. human rights boss Michelle Bachelet, a former president of Chile, called on Monday for independent investigations into the deaths in weekend protests there, citing “disturbing allegations” of excessive use of force by security forces.

Bachelet made no explicit reference to her successor Pinera — a center-right billionaire — but called for immediate dialogue and a halt to “inflammatory rhetoric” which she warned could aggravate the situation.

In Santiago, most schools and businesses remained closed on Monday as many of the city’s six million residents ventured out in search of basic supplies after the weekend lock-down.

In most cases they joined hours-long lines at grocery stores and gas stations which were in some cases guarded by soldiers and police.

Walmart Chile said more than 100 of its grocery stores had been looted, and in some cases burned.

Tourists and travelers also faced hurdles. Delays persisted at Santiago’s international airport, where 253 flights were canceled through Monday morning as airport and airline staff struggled to make it to work.

Chilean airline LATAM, the region’s largest, said on social media it was “continuing to work to minimize the impact of the situation on our operation.” The airline advised passengers not to travel to the airport if their flight was canceled but to rebook on the website.

Prepare to study in Canada
Study permit: Who can apply
Manitoba PNP Draw: Province Invites 336 Canada Immigration Candidates
Ontario Targets 53 Tech and Health Occupations In New PNP Draw
Pharmacy Assistants Can Now Immigrate To Canada Through Express Entry
Canada Invites 893 Candidates In First PNP-Only Express Entry Draw Of 2023
How You Could Immigrate To Canada Through The Start-Up Visa In 2023