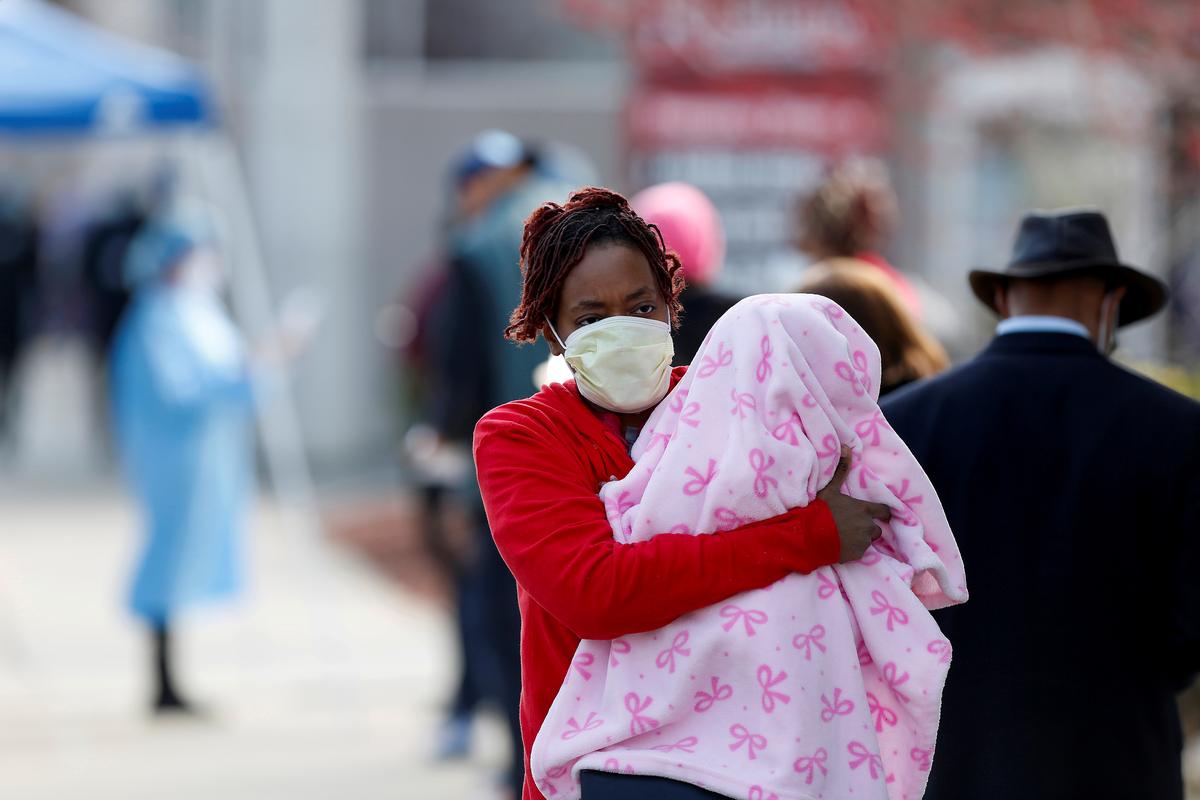 (Reuters) – The new coronavirus is killing African-Americans at a higher rate than the U.S. population at large, according to preliminary numbers from Louisiana, Michigan and Illinois that officials say point to disparities in health and healthcare access.

A woman holds a child as she walks past people waiting in line to receive testing during the global outbreak of the coronavirus disease (COVID-19) outside Roseland Community Hospital in Chicago, Illinois, U.S., April 7, 2020. REUTERS/Joshua Lott

The figures were reported by state and city leaders at briefings on the coronavirus, including Louisiana Governor John Edwards who said more than 70% of the 512 people killed by the coronavirus in Louisiana as of Monday were black, a much larger percentage than the state’s population that black people represent, about 33 percent.

Michigan officials also said that the coronavirus took a disproportionate toll on African-Americans with 40% of the reported deaths in the state, whose population is 14% African-American. As of Tuesday, confirmed cases in Michigan were 18,970 with 845 deaths.

The data is preliminary and not national and does not explain what is causing the disparities. However, community leaders and public health officials said it could reflect both higher levels of underlying illnesses that make African-Americans more vulnerable as well as possibly lower levels of access to healthcare.

Diabetes, heart disease and long-term lung problems are the most common underlying conditions among Americans hospitalized with COVID-19, the respiratory illness caused by the new coronavirus, the U.S. Centers for Disease Control and Prevention (CDC) said in a report here published on March 31. One in five people requiring intensive care had no such health issues, it said.

QuanTez Pressley, a 33-year-old preacher at the Third New Hope Baptist Church in Detroit, said that issues such as lack of access to fresh foods and people crowded into small living quarters “make those individuals in marginalized communities more vulnerable to the worst outcomes of pandemics.”

Some officials at the CDC and various state health departments over the past week have privately said the data they are receiving from hospitals is inconsistent, which they attributed to the chaos of trying to keep people alive amid a pandemic. They said there were instances where health care providers did not check the boxes that provide demographic information on the patients.

“If you end up in a situation where you are on a ventilator, and that ventilator is keeping your lungs working and your body is fighting off the infection, if your heart or your kidneys or your lungs are already weaker, you have a harder time fighting off that infection,” Detroit Mayor Mike Duggan said at a briefing on the coronavirus on Monday.

Civil rights groups and some lawmakers have criticized the CDC and some state health departments for not publicly releasing details on the racial breakdown of those dying or becoming critically ill from COVID-19.

The CDC has not responded to requests for comment on the topic.

Chicago Mayor Lori Lightfoot on Monday stood before charts at a briefing showing the inequalities between white and black coronavirus victims in her city. African-Americans account for 72% of coronavirus deaths despite representing just about one-third of Chicago’s population of 2.7 million.

“Those numbers take your breath away,” said Lightfoot. “This is a call to action moment for all of us.”

Lightfoot demanded that doctors and other hospital staff take the time to fill out paperwork so that leaders could better understand the pandemic.

A local resident waits for the bus as the spread of the coronavirus disease (COVID-19) continues, in New Orleans, Louisiana U.S., April 7, 2020. REUTERS/Carlos Barria

“It starts out with the disparity that has already existed in health care provision for people of color. We already started out with an unequal system of healthcare,” Illinois Governor J.B. Pritzker said on Monday. “It gets massively exacerbated when you bring on something like COVID-19.”

Overall in the United States, there were at least 397,000 confirmed coronavirus cases with more than 12,819 deaths as of Tuesday night, according to a Reuters tally of state and local government sources.

Click tmsnrt.rs/2w7hX9T for a GRAPHIC on tracking COVID-19 in the United States.