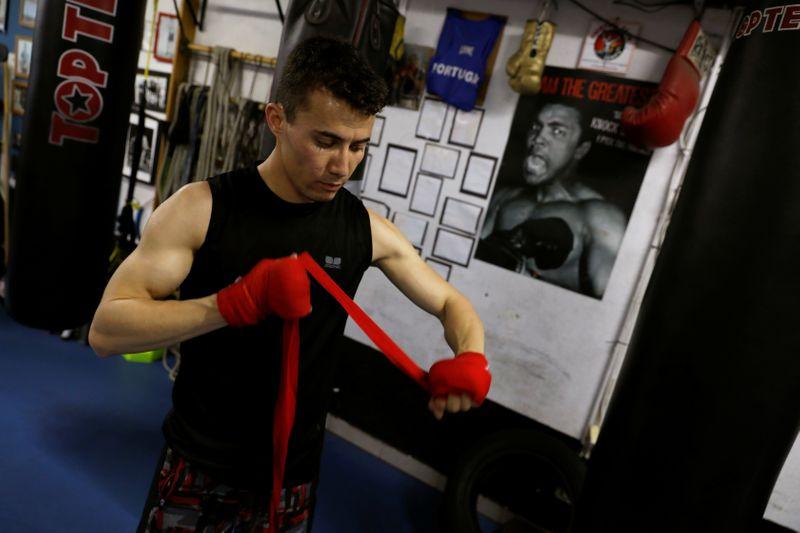 LISBON (Reuters) – A young Afghan refugee living in Portugal is attempting to achieve in 10 months what normally takes years of preparation – qualifying to box in the Olympics.

But 22-year-old Farid Walizadeh, who faces his first international qualification challenge next month ahead of the Tokyo 2020 games, is no stranger to uphill struggles.

At the age of seven, he fled his hometown in northeastern Afghanistan, traveling more than 2,500 km (1,550 miles), mostly on foot, to Turkey. There he was arrested on arrival after smugglers he had met on the way loaded him up with a backpack they said contained sugar but was in fact filled with drugs.

“I’d lost my house, my childhood, my life … but you can build everything again,” he said, speaking in English.

Farid’s mother had fled religious persecution to Pakistan. His father was in the military. Conflicts over land rocked the Afghan city where he lived with his adoptive parents. “I didn’t have a choice. I had to leave,” Farid said.

“We were a group of 200 people at first. But the mountains of Afghanistan are dry and cold, and the group became smaller,” he said. After entering Pakistan, he tumbled off the back of a truck and continued alone to the Iranian-Turkish border.

Housed in an orphanage in Istanbul, the nine-year-old began practicing kung-fu and taekwondo to defend himself from bullies.

“I had no protection from the boys on the street or in school,” he said. “They didn’t like refugees.”

After five years in Istanbul, the UN Refugee Agency relocated him to Portugal, where he was taken in by a non-profit organization in Lisbon for unaccompanied minors seeking asylum.

“All I knew of Portugal was Cristiano Ronaldo. But I thought I’d go there and try a new life,” he smiled.

But as a refugee without Portuguese nationality, his career opportunities were limited.

Farid, then 18, was in no condition to compete. He worked nights in a hotel and studied during the day to achieve his second big dream in life: becoming an architect.

But Portugal’s Olympic Committee had its eye on him, and last March he received a scholarship from the IOC to train full-time for the 2020 games that begin in July.

Farid’s coach Paulo Seco, who has sent various Portuguese boxers to the Olympics, is blunt about the challenge Farid faces: “This type of work is never done in 10 months. I’ve literally got to make him bleed to show people he can do this.”

Farid will compete in a qualifying tournament for European athletes in London next month in his bid to represent the Refugee Olympic Team, to be followed by a world tournament in Paris in May.

“I work hard,” he said. “I want to show people there’s always a second chance if they want it… That’s why I want to go to the Olympics. If I can do it, they can do it.”