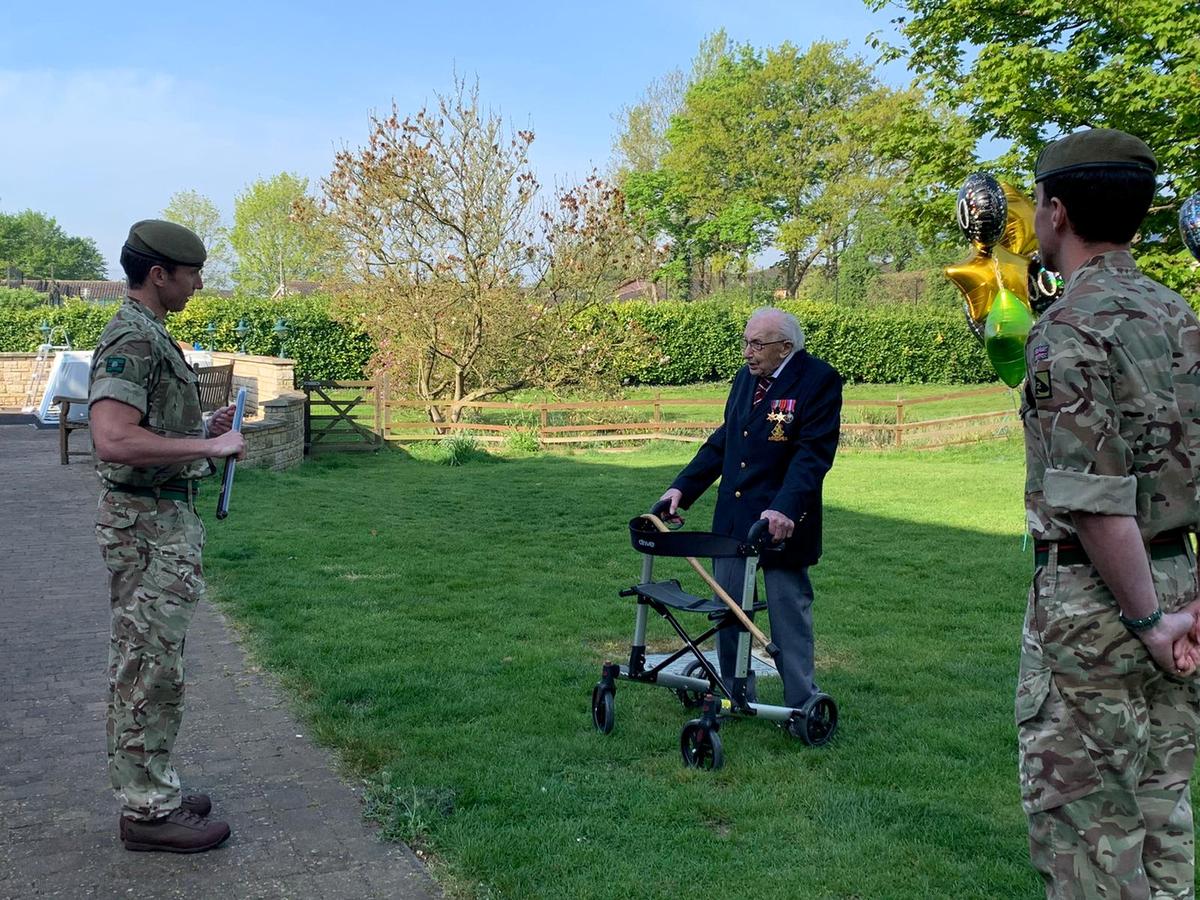 LONDON (Reuters) – A 99-year-old British war veteran who has raised more than 17.9 million pounds for the health service by walking laps of his garden was praised by Queen Elizabeth’s grandson as an “absolute legend”.

Veteran Capt Tom Moore talks to soldiers from 1st Battalion The Yorkshire Regiment who formed a Guard of Honour for the veteran as he completed his fundraising walk for the health services, in Bedfordshire, Britain, April 16, 2020. Ministry of Defence/Crown Copyright 2020/Handout via REUTERS THIS IMAGE HAS BEEN SUPPLIED BY A THIRD PARTY. NO RESALES. NO ARCHIVES

Tom Moore, retired army captain who served in India, Burma and Sumatra during World War Two, became a symbol of British endurance in the face of adversity after completing 100 laps of his garden in a fundraising effort for the health service.

Moore, who has used a walking frame with wheels since breaking his hip, had aimed to raise 1,000 pounds by completing his challenge before his 100th birthday on April 30.

But his endeavour – and enduring optimism – struck a chord with people across the United Kingdom and the wider world, bringing a ray of hope amid the doom of the coronavirus outbreak that has killed more than 143,000 people worldwide.

“What I love also is he’s a 99-year war vet, he’s been around a long time, knows everything and it’s wonderful that everyone has been inspired by his story and his determination,” William said in an interview broadcast on Friday.

Moore said that the current doom would clear and that one day “the sun will shine on you again and the clouds will go away”.

Such is his renown, that some have called for Moore to be knighted by Queen Elizabeth – a ritual recognition that dates back thousands of years through England’s medieval past.

“It makes me laugh,” Moore said on Thursday when asked about being recognised formally, quipping a reference to the Tudor statesman Sir Thomas More.

British honours, such as knighthoods, are awarded by the queen, usually on the recommendation of a committee comprising government officials and citizens.

British Transport Secretary Grant Shapps said “everybody is supportive of the idea” of Moore being recognised.

“I wouldn’t want to preempt Her Majesty’s honours list but it is quite clear that this gentleman has just been almost the salvation of the nation in these difficult times,” he said.

“I think everybody is supportive of the idea of him being recognised.”

Moore said the walk was inspired by the care he received from Britain’s state-run National Health Service when he broke his hip and when he was treated for cancer.

Moore said on Thursday his supporters had donated an “absolutely fantastic sum of money”.

“It’s unbelievable that people would be so kind to give that sort of money to the National Health Service,” he said.